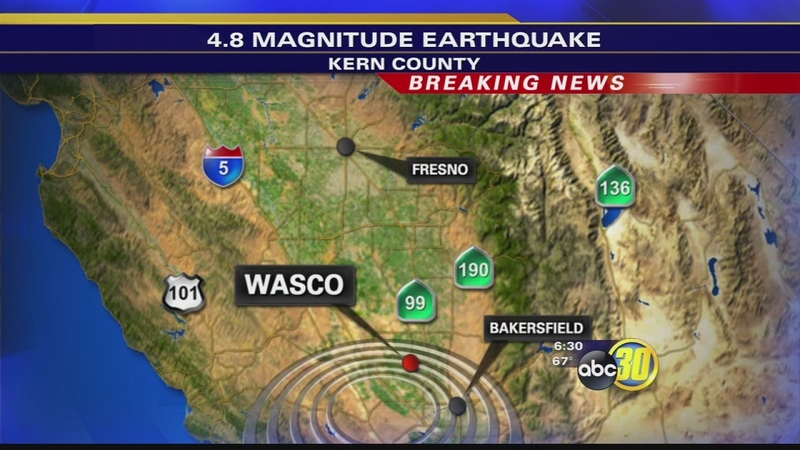 WASCO, Calif. (KFSN) -- For the second time in a week, Central California has been shaken by an earthquake. This one was felt here in Fresno, but we've also heard from viewers closer to the epicenter in the Bakersfield area. The quake measured at 4. 9 by geologist and was centered in the Kern County town of Wasco at about 4:00 p.m. The USGS downgraded the quake to a 4.8 but then changed it back to 4.9.

Surveillance video from a tire shop in Wasco showed the moment the quake shook the small town. Once it hit, two men jump out of their seats and went running out of the building. A third man inside the building followed closely behind them. None of them were injured and they said when it happened they thought it was just a train passing by.

Tuesday's quake in Wasco was not located near any major fault lines and it is not in the area where a moderate to major earthquake is expected. But what is unusual, Wakabayashi said, is the depth of the quake, it is deeper than normally expect in the Central Valley. "If that were a little bit shallower it might not be such an oddball. We would consider this as oddball. But at again, 20 some odd kilometers down-- that's 12 or 13 some odd miles down."

He also pointed out that there is no connection to last week's earthquake in Big Pine that was the same size. Two earthquakes at the same size in a one week period is not unusual for California.

He said there is no way to tell if this is a sign of the big one. Seismologist have no way of forecasting earthquakes and that they can only give a time frame of several years.
Related topics:
earthquake
Copyright © 2021 KFSN-TV. All Rights Reserved.
TOP STORIES
Merced teacher back home after battle with COVID-19
LIVE: Biden, Putin meet for long-anticipated summit
Looking back at the ups and downs of COVID in Central CA
24-year-old man shot in southwest Fresno, police say
Fresno reopens public pools amid heat wave
What changes throughout Central California as state reopens
CA has reopened, but not everyone can go maskless
Show More
Suspect involved in standoff in Kings County identified
Israeli military launches airstrikes in Gaza
19-year-old arrested on arson charges for NW Fresno fires
What to expect from CA's reopening today
Newsom picks 10 winners of $15M to celebrate reopening
More TOP STORIES News