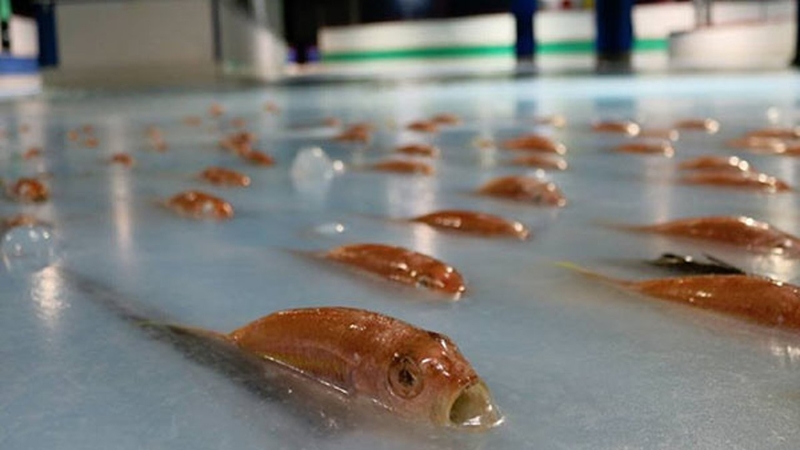 A Japanese theme park which froze 5,000 sea creatures into the floor of an ice rink was forced to close the attraction on Sunday after a public backlash.

Fish, crabs and other shellfish were embedded in the ice as part of a special winter attraction, called "Freezing Port," at Japan's Space World theme park.

The park advertised it as a "world first" and posted images of the fish on its official Facebook site with captions including "I am d... d... drowning, s ... s... suffocating."

Space World manager Toshimi Takeda told CNN Monday the reaction on social media had been brutal once news of the attraction was broadcast on local television.

"We were shocked to hear the reaction as the ice skate rink was very popular since it opened two weeks ago, we had an unprecedented number of visitors," he said.

"(But) we had endless opinions about the project, we were shocked ... We are sorry for the project and decided to the rink on that night."

Takeda told CNN the park would unfreeze the skate rink to remove the fish, hold an "appropriate religious service" and then reuse them as fertilizer.

He added the fish were purchased at a local fish market, and were dead before they were frozen.

'YOU HAVE NO SOUL'

After news of the "Freezing Port" attraction broke on Saturday, the response on social media was swift.

"Why is it fun to skate over the frozen?" a Japanese Facebook page called Relief Pain Animals said. "It is shocking that this kind of idea was taken up normally in Japan ... This is the worst attraction educationally."

Other regular social media users voiced their fury at the park's new attraction. "This really makes me upset. Do you think children are happy to see this fish in skate rink?" Miura Tsubasa commented.

"You have no soul to plan such an event to begin with," another user called Misaki said.

In a statement, Space World said it apologized for those who found the ice rink "uncomfortable."

"Therefore we will cancel the event of the Ice Museum from today," the statement said.

All Space World Facebook posts around the attraction have been deleted.