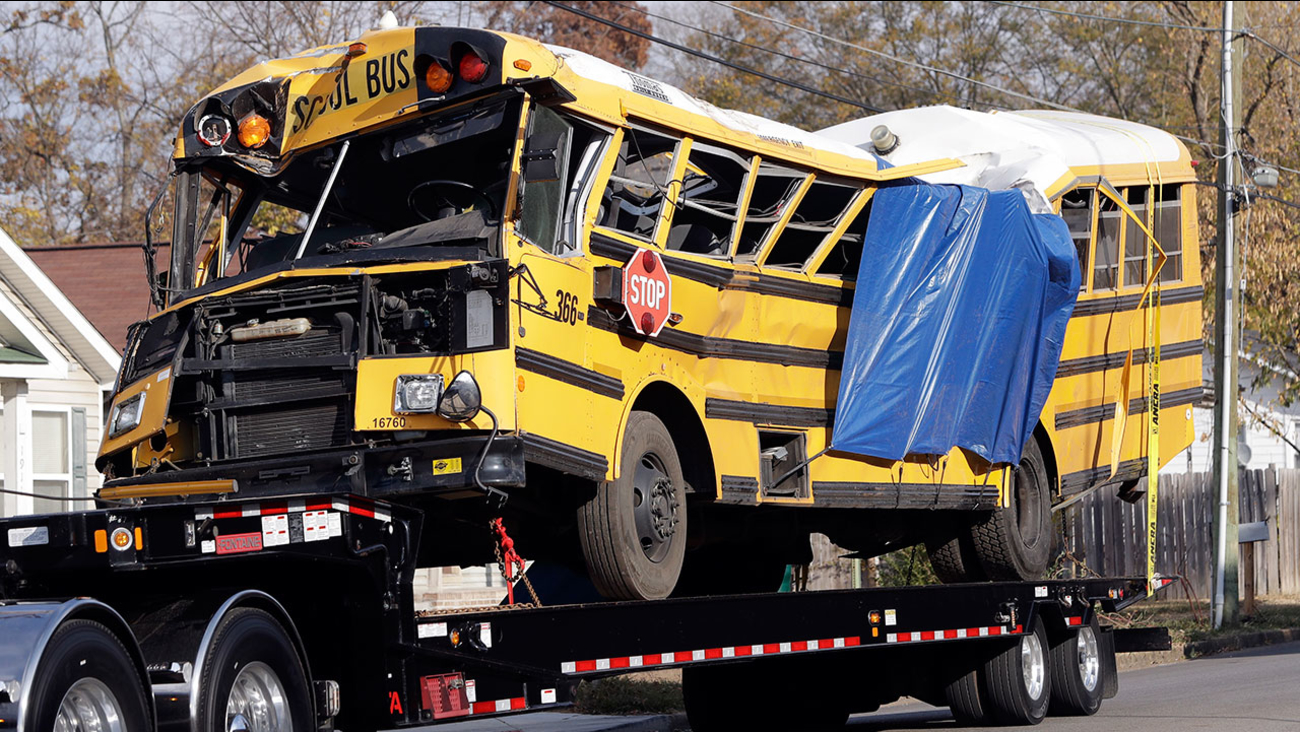 CHATTANOOGA, Tenn. -- A school bus driver had no drugs or alcohol in his system when he careened off a road and smashed into a tree, killing six elementary schoolchildren, police said Wednesday.

Later Wednesday, the police department sent a tweet saying a sixth child had died of injuries from the crash.

Federal authorities said Walker left the designated bus route and had driven onto a curvy road while carrying 37 children on their way home from Woodmore Elementary School.

Police said he was driving well over the posted 30 mph limit when he lost control of the bus and slammed into a tree. Several children remain in the hospital.

National Transportation Safety Board Chairman Christopher A. Hart says it's unclear why driver Walker left the designated route and drove the bus down Talley Road.

"One of the things we're exploring is A, has he done it before, and B, if so, why?" Hart said.

He said Walker, who has no criminal record in the state, had taken on a second job at an Amazon Fulfillment Center, and part of the agency's investigation will look at whether fatigue played a role in the wreck.

The NTSB will also bring in a specialist to analyze video and audio recordings from the bus's interior cameras that were damaged in Monday's wreck.

Police disputed one woman's claim that the driver asked the children if they were "prepared to die" just before the wreck. Jasmine Mateen, whose 6-year-old daughter was among the dead, said one of her two surviving children who were on the bus told her about the driver's remarks.

Garrett, however, said at a Wednesday press conference: "I want to be very clear on this. No witness we have spoken with has that information or provided it directly to our investigators."

He added that investigators have not yet interviewed the children on the bus and asked anyone with additional information to bring it to police.

Three of the children killed were in fourth grade, one in first grade and another in kindergarten, said Kirk Kelly, interim superintendent of Hamilton County schools. The age and identity of the sixth child wasn't immediately released. A makeshift memorial to them grew up around a telephone pole, with stuffed bears, flowers and dozens of balloons.

Their families remembered them as fun, happy children taken much too soon.

D'Myunn Brown liked to play little tricks on grown-ups. The 6-year-old would snatch a cellphone, hide it, then giggle and bat his big brown eyes.

"That's what made him so pretty, and he was as sweet as he could be," said his great-grandmother, Winifred Bray. "I'm still numb. I still can't believe he's gone."

LaFrederick Thirkill remembered his 9-year-old cousin, Cordayja Jones, as a girly-girl who liked dressing up and giving hugs.

Thirkill is the principal at Orchard Knob Elementary, where Cordayja attended before changing schools to Woodmore Elementary.

She was a polite little girl, he said. Even though he was her cousin, she called him "Mr. Thirkill" when she saw him in the hallways.

"I remember her as just a kid who always smiles," he said.

School officials repeatedly declined to answer questions Wednesday about whether they received complaints about the driver. School Principal Brenda Adamson-Cothran said their focus is on "giving our families and students the support that they need in this tragedy."

Walker was involved in another bus accident only two months ago, police said. In September, he was driving the bus into a blind curve when he crossed over the center line and hit an SUV, according to a police report. No one was injured, and the damage to both vehicles was minor. He was not cited for any violations.

Hamilton County School District spokeswoman Amy Katcher referred all questions about his performance and that of other drivers to the company that manages them, Durham School Services.

The bus company did not respond to questions about its safety record or Walker's employment history. Durham CEO David A. Duke released a video statement expressing condolences to the families and pledging to work with investigators.

A mother and 8-year-old son, who was injured in the crash, filed a lawsuit against Durham on Wednesday, attorney Herbert Thornbury confirmed. He said the boy suffered minor injuries, watched his best friend die and has been crying uncontrollably ever since. The lawsuit contends the boy may be permanently injured, sustained pain and suffering and will incur medical and other expenses as a result of the wreck.

Based in Warrenville, Illinois, Durham operates about 13,700 vehicles across the U.S. and has nearly as many drivers, according to the Federal Motor Carrier Safety Administration.

The company has had 346 crashes over two years, including three resulting in deaths and 142 with injuries, federal figures show. During that period, it had 53 incidents involving unsafe driving violations.