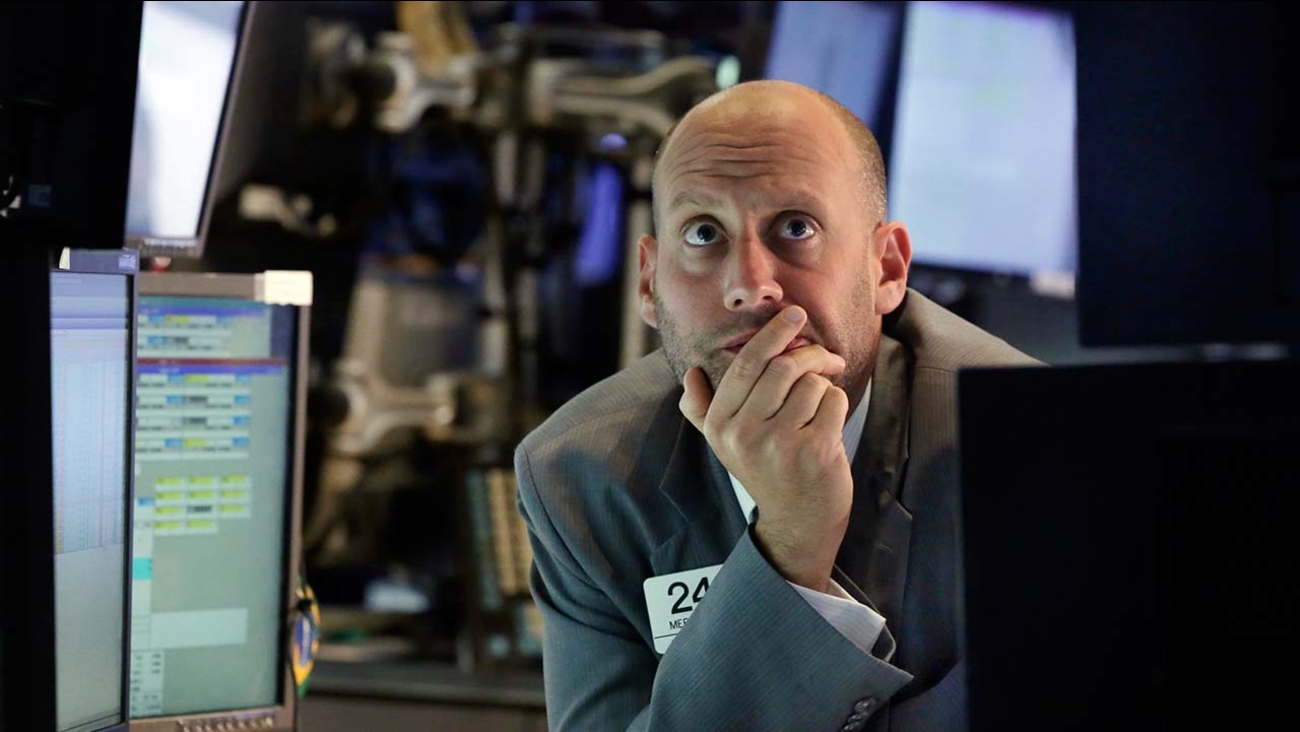 Specialist Meric Greenbaum works at his post on the floor of the New York Stock Exchange, after the the Federal Reserve announced its rate decision, Thursday, Sept. 17, 2015. (Richard Drew)

WASHINGTON -- The Federal Reserve is keeping U.S. interest rates at record lows in the face of threats from a weak global economy, persistently low inflation and unstable financial markets.

Signs of a sharp slowdown in China have intensified fear among investors about the U.S. and global economy. And low oil prices and a high-priced dollar have kept inflation undesirably low.

Before year's end, many analysts still expect the Fed to raise its key short-term rate, which it's kept near zero since 2008. A higher Fed rate would eventually send rates up on many consumer and business loans.

Financial markets had been zigzagging with anxiety as investors tried to divine whether the Fed would start phasing out the period of extraordinarily low borrowing rates it launched at a time of crisis.

Some economists argued that many factors - from a sharply slowing China to the tumult in markets to persistently less-than-optimal inflation - raised concerns about a rate hike. Others contended that with the U.S. job market considered essentially recovered from the Great Recession, it was time to start edging toward normal rates.

The anxiety that gripped investors stemmed in part from concern that once the Fed starts raising its key rate, other rates - for mortgages, car loans, business borrowing - will eventually rise. Some fear the economy might suffer.

Yet the Fed's influence on many consumer and business rates is only indirect. In the short run at least, those rates could continue to stay low, held down by low inflation globally and by a flow of money into U.S Treasurys.

Fed officials have stressed that once the central bank starts raising rates, the process will be extremely gradual. The Fed might pause for months after its first hike and assess the consequences before proceeding further. Still, economists generally say the effects of a series of small rate hikes will be negligible.

Until turmoil struck markets this summer, a September rate hike seemed a lock. Then, China's surprise decision to devalue its currency ignited fears that the world's second-largest economy was weakening faster than assumed. Stocks tumbled.

At an economic conference last month in Jackson Hole, Wyoming, Fed officials sent mixed signals about this week's meeting. Some indicated they were ready to raise rates if markets had settled and if the economy kept improving. The unemployment rate reached a seven-year low of 5.1 percent in August, while job growth, though solid, slowed a bit.

In July, when Yellen delivered an economic report to Congress, she reiterated that the Fed would likely raise rates before year's end. But she wasn't specific.

One reason for the likely gradual pace of rate hikes is that Fed officials want to make sure the new machinery they will deploy to control rates will work effectively.

Before the Great Recession, the Fed would control its federal funds rate - the rate banks charge each other for overnight loans - by adjusting how much money the banks held. To lower rates, the Fed would buy Treasurys held by the banks. And the banks would use the money they received to step up lending.

If the Fed wanted to raise short-term rates, it would sell Treasurys to the banks, thereby reducing the money the banks held and driving loan rates up.

But all the bond buying the Fed did to cut rates left banks swimming in reserves. So the Fed needs other tools to influence rates. A key plan is to raise the interest the Fed pays banks on their reserves. The idea would be to set a floor on interest the banks charge their customers: Banks wouldn't be willing to lend at lower rates than they're receiving from the Fed. This could have the effect of reducing lending.
Related topics:
businessfederal reserveinterest rates
Copyright © 2021 by The Associated Press. All Rights Reserved.
TOP STORIES
2 Livingston officers arrested for allegedly filing false report
Mother shot in southwest Fresno 'not intended target,' police say
Body of man missing in Pine Flat Lake recovered
2 seriously injured in car-to-car shooting in Visalia
All of Central CA in 'exceptional drought'
Fresno mayor not ready to impose mask mandate
Calley's Law aims to further protect domestic violence victims
Show More
Valley's Jalen Green expected to be a top pick in NBA Draft
Las Vegas to mask up indoors again after Nevada adopts COVID-19 rule
USA's Suni Lee wins all-around gold
Pedestrian hit and killed by driver in Porterville
Federal workers required to get vaccinated; military may be next
More TOP STORIES News