PETA sues to give monkey the copyright of selfie photos 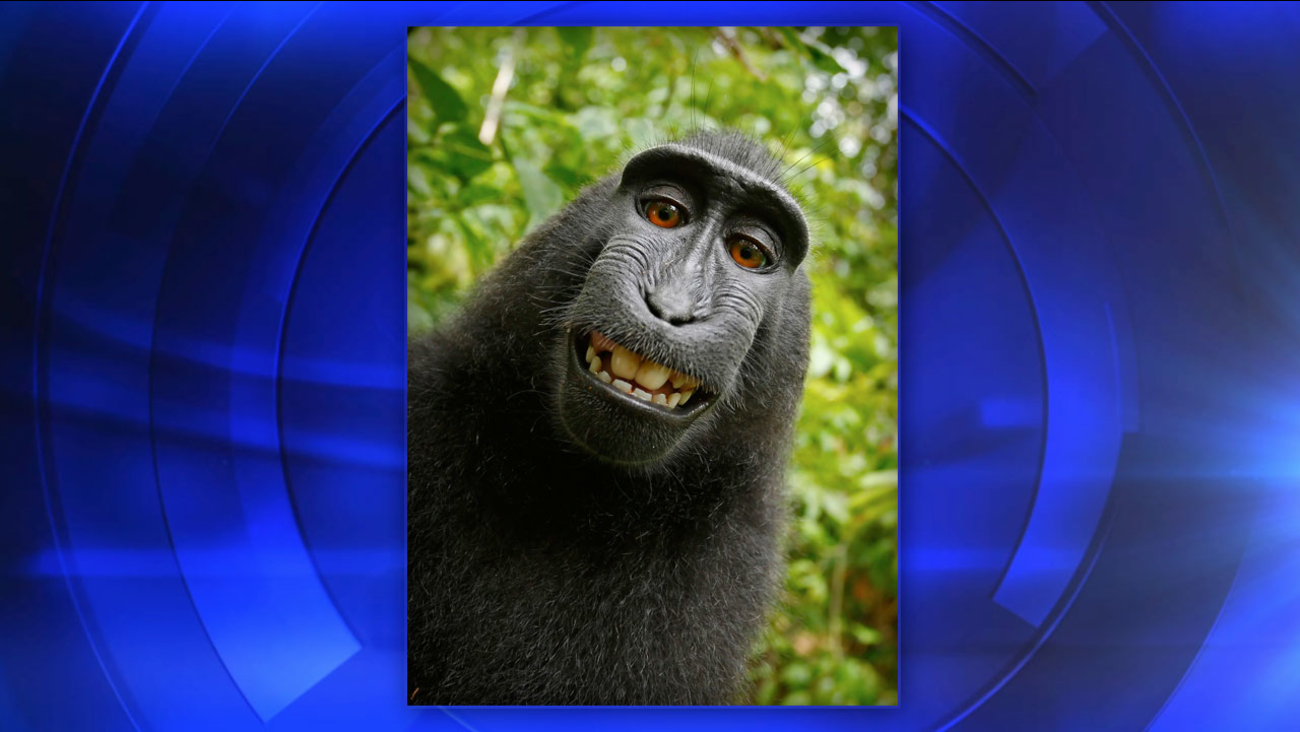 A macaque monkey who took now-famous selfie photographs should be declared the copyright owner of the photos, rather than the nature photographer who positioned the camera, animal-rights activists contend in a novel lawsuit filed Tuesday.

The suit was filed in federal court in San Francisco by People for the Ethical Treatment of Animals. It seeks a court order allowing PETA to administer all proceeds from the photos for the benefit of the monkey, which it identified as 6-year-old Naruto, and other crested macaques living in a reserve on the Indonesian island of Sulawesi.

The photos were taken during a 2011 trip to Sulawesi by British nature photographer David Slater. Through San Francisco-based self-publishing company Blurb, he has published a book called "Wildlife Personalities" that includes the "monkey selfie" photos.

However, the photos have been widely distributed elsewhere by outlets, including Wikipedia, which contend that no one owns the copyright to the images because they were taken by an animal, not a person. Slater, who is exploring legal action against some of those outlets, said he was "very saddened" by PETA's lawsuit because he considers himself an advocate of animal rights.

Last year, the U.S. Copyright Office issued an updated compendium of its policies, including a section stipulating that it would register copyrights only for works produced by human beings. It specified that works produced by animals, whether a photo taken by a monkey or a mural painted by an elephant, would not qualify.

However, Jeffrey Kerr, a lawyer with PETA, said the copyright office policy "is only an opinion," and the U.S. Copyright Act itself does not contain language limiting copyrights to humans.

"The act grants copyright to authors of original works, with no limit on species," Kerr said. "Copyright law is clear: It's not the person who owns the camera, it's the being who took the photograph."

Citing Slater's own written accounts of his encounter with the macaques, the lawsuit asserts that Naruto "authored the monkey selfies by his own independent, autonomous actions in examining and manipulating Slater's unattended camera."

Slater has been openly dismayed by the prolonged dispute over the photos, and says the British copyright obtained for the photos by his company, Wildlife Personalities Ltd., should be honored worldwide.

"The facts are that I was the intellect behind the photos, I set the whole thing up," he said in an email. "A monkey only pressed a button of a camera set up on a tripod - a tripod I positioned and held throughout the shoot."

Last year, as the dispute simmered, Slater offered copies of a "monkey selfie" photo to purchasers willing to pay only for shipping and handling, and said he would donate $1.70 per order to a conservation project dedicated to protecting Sulawesi's macaques. But he also has defended his right to make money from the photos.

"I sincerely wish my 5-year-old daughter to be able to be proud of her father and inherit my copyrights so that she can make my work into an asset and inheritance and go to university," he wrote in his email. "I have very little else to offer her."

PETA has on occasion pursued lawsuits that were widely viewed by other legal experts as offering little chance of success - for example, a 2011 lawsuit accusing the SeaWorld parks of keeping five killer whales in conditions that violate the U.S. Constitution's ban on slavery. A federal judge dismissed the suit, saying the 13th Amendment applied only to humans.

Regarding the new lawsuit, Kerr said PETA "has a very strong case" that Naruto should be declared the photo's owner. The selfies were introduced as exhibits in the suit.

Joining PETA in the suit is Antje Engelhardt, a primatologist from Germany who has studied the Sulawesi macaques.

David Favre, a Michigan State University law professor who often writes about animal rights, said by email that the copyright issue raised by PETA "is a cutting edge legal question."

"They have a fair argument," he wrote, "but I would have to say it is an uphill battle."

Cheryl Dancey Balough, a Chicago lawyer who specializes in copyright Law, said a key question - if the lawsuit moves forward - is whether Slater's creative contribution to the selfies rises to a level that warrants a copyright.

"It trivializes the terrible problems of needless animal slaughter and avoidable animal exploitation worldwide for lawyers to focus so much energy and ingenuity on whether monkeys own the copyright in selfies taken under these contrived circumstances," he said.
Related topics:
u.s. & worldmonkeyanimal rightsselfie
Copyright © 2020 by The Associated Press. All Rights Reserved.
U.S. & WORLD

Federal judge says 2020 census must continue for another month