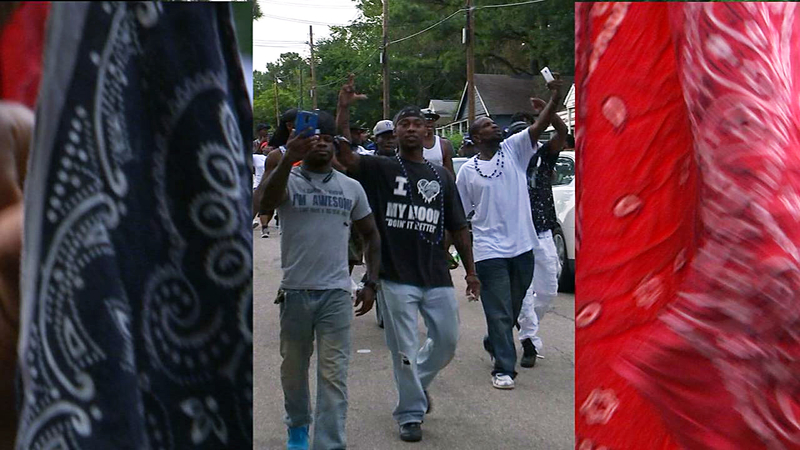 RALEIGH -- As music blared and curious neighbors looked on from their porches, a powerful message of unity played out in southeast Raleigh on Monday night.

What neighbors witnessed on Quarry Street may be a first -- red bandannas and blue bandannas held in the air, together. Members of rival gangs, Bloods and Crips, were marching united. The gangs announced they had declared a "truce."

"They said it would never happen." - Gang members declare a "truce" in southeast Raleigh. #abc11 pic.twitter.com/nk9a5PqwXn

"Not one of you are enemies," Community activist Diana Powell said to the groups as they stood together in the middle of Quarry Street Park.

Powell played diplomat between the two sides in the months leading up to Monday night.

The neighborhood's youngest residents were invited to watch. In the wake of the police shootings in Louisiana and Minnesota, and the ambush on officers in Dallas- Powell has faced tough questions from kids.

And so, Monday night was a first step.

"This is what I want to say to you all, don't let this be just a moment, let it be a movement," Powell told the gang members.

Shine Pulley, a former gang member, now trying to turn his life around, also addressed the group. He said he was hopeful the moment would be laying the groundwork for a holding peace.

"That's what we out here for, trying to stand out here in unity, trying to bring everything together," Pulley said.

Even Raleigh Police Chief Cassandra Deck-Brown was there, although only for a moment. The chief was briefed on what was set to happen before departing for another community peace vigil.

But District Court Judge Vince Rozier was here for it all, and was cautiously optimistic.

"If Bloods and Crips, who usually are against each other on the sheer nature of a bandanna, can come together -- then there's so much more hope for the rest of this country," Judge Rozier said.

"They said it would never happen," was a phrase uttered many times on this night. And, while the truce did happen, no one can be certain where it goes from here.

Will the truce hold? How do you keep the peace?