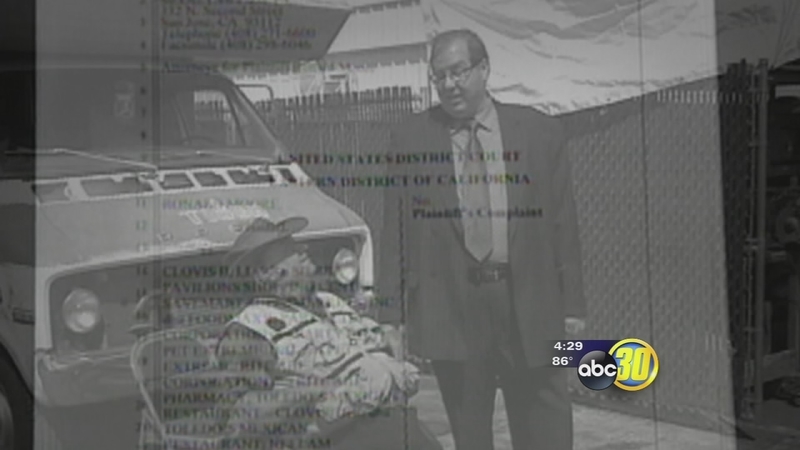 FRESNO, Calif. (KFSN) -- Hundreds of Central Valley businesses have been sued for violations of the Americans with Disabilities Act.

And the disabled men behind many of those lawsuits are filing their own lawsuits, saying they were used and misled by lawyers lining their own pockets.

When Daniel Delgado sat alongside Randy Moore in 2010, the wheelchair workshop owner and the attorney were in the middle of blanketing the Central Valley with legal agony.

Delgado says Moore approached him to be a plaintiff in lawsuits over the Americans with Disabilities Act -- or ADA. The idea was to improve accessibility for disabled people in Central California by enforcing a law on the books since 1990.

"I didn't expect this to be hurting a lot of business," Delgado said. "I thought it was going to improve, to improve to make it right."

But he signed off as the plaintiff on dozens of cases and recruited several of his disabled friends to be plaintiffs for the Moores. And with each new case, a business suffered, paying for its violations.

Nearly all of them paid the Moore's thousands of dollars to avoid expensive trials. A few, like El Gallo in Clovis, say costly settlements forced them to shut down.

And the lawsuits kept coming.

Tanya Moore has filed more than 700 federal lawsuits, mostly related to ADA. But Delgado and John Morales claim they were used.

It can be legitimate practice to send disabled people into businesses they might frequent to test for violations. But Delgado and Morales say the Moores sometimes sent them to businesses they would never have otherwise visited with instructions to buy something and get a receipt.

"She would say, I'd turn in my receipt and she goes 'Okay, don't worry about it," former ADA plaintiff John Morales explained. "I'll go, I'll send somebody and we'll find something."

Delgado says on those few occasions, he got specific instructions to visit the bathroom or other parts of a store. He remembers at least one business where violations he never noticed led to a settlement with the Moore Law Firm.

And when a case settled, Delgado and Morales say they never knew for how much. They claim the Moores sent them a page to sign and nothing else.

But now, the script is flipped.

Delgado and Morales are plaintiffs again in new lawsuits. But this time around, the Moores are the defendants, facing allegations of broken promises.

Tanya Moore told an Action News reporter that the lawsuits stem from a vendetta by Ty Kharazi, one of the attorneys representing Delgado and Morales. She wouldn't specifically address the claims, but said they don't "present a fair or accurate picture of the events or my practice."

And three years ago, around the time the firm represented Delgado and Morales, an Action News reporter spoke to her husband over the phone, and Randy Moore specifically denied sending disabled clients to already-scouted locations.

"We don't have to do that," Moore said. "Can you understand that there are so many places out there we don't have to scout out. Nobody has to be individually picked off or targeted."

Tanya Moore's son, Geoshua Levinson, is a licensed certified access specialist, whose job is to inspect businesses for ADA violations.

Since the interview with Randy Moore, a complaint from Kharazi accused Levinson of inspecting a Fresno business without the owner's authorization to identify it as a target for an ADA lawsuit filed by the Moore Law Firm.

The complaint leading to his suspension accused Levinson of covertly inspecting a Fresno Shell station without the owner's authorization to identify it as a target for an ADA lawsuit filed by the Moore Law Firm on behalf of Ronald Moore.

The Shell station's owner fought the lawsuit, but nearly every business the Moores have sued agreed to a settlement rather than facing an expensive trial.

A deputy state architect agreed it was a violation and suspended Levinson.

He has since been reinstated.

Randy Moore portrayed the work he and his wife were doing as almost heroic, standing up for a community that couldn't stand up without their help -- a community close to his heart.

"These people like my brother, you know, he is disabled," Randy said.

Ronald Moore was the plaintiff in more than 200 cases, including the one against the Shell station. And when we visited his Clovis home, and our cameras were rolling, he struggled to move out of his wheelchair.

But a private investigator got a different look.

"Oh my God," Delgado exclaimed while watching a video of Ronald Moore. "I can't believe this."

The sight of Ronald struggling to get out of his wheelchair is exactly what you'd expect to see after reading the lawsuits in his name. The Clovis resident is the listed plaintiff in more than 200 cases filed by Randy and Tanya Moore, his brother and sister-in-law.

One of the places the Moores sued is a donut shop in Reedley and one of the problems was with the signage.

The shop had a disabled parking only sign up, but it didn't have the half that states "Minimum Fine $250" and without that part, this is a violation.

What the Moores may not have known is Doughnuts To Go is managed by Lee Ky, who suffers from cerebral palsy.

"Here I am all my life in a wheelchair and I get around in the community just fine," Ky explained.

Ky says she never had any accessibility problems at her own store, but she made some updates after she was sued for violations and settled with the Moore Law Firm to make the lawsuit go away.

So when an Action News reporter showed her the video of Ronald Moore, the man who sued her, lifting his wheelchair into his SUV, then walking up to the driver's seat, she was pretty upset.

"I wish I could be him sometimes," Ky said. "I wish I could just get up and then walking and all the sudden becoming in the wheelchair. It looks bad."

The video is part of a federal motion for sanctions for misconduct against the Moores, filed by a lawyer for Zlfred's, another business they sued.

In the middle of their ADA lawsuit, Zlfred's private investigator also recorded Ronald Moore walking around his front yard without a cane or anything to lean on.

They call this sight a clear contradiction of his claim in court filings that he "does not have the ability to walk without wobbling and the risk of falling", so they don't think he should be suing anyone.

But in two other Ronald Moore lawsuits, judges have ruled he has proved he's disabled, even after they saw the video. And the Moores have filed almost 500 cases with other plaintiffs.

A few of them, including Delgado and Morales, say they now feel used and misled, even embarrassed about their roles in the lawsuits.

"And then they'd say 'don't worry about it. We'll figure out how we'll get them,' Delgado said.

Judges have ruled sending disabled people into businesses they would normally visit to test for ADA violations can be okay, but Randy Moore has denied the firm scouted locations for violations first, then sent clients in later.

But when a case settled Delgado and Morales say they never knew for how much.

"Signature page. That's all they'd give you?," An Action News reporter asked.

"Yeah," Morales replied. "And I would sign it and then I'd fax it back."

Their lawsuit claims the settlements average somewhere around $9,000 or $10,000, but more than 90 percent of it went to the Moores.

"If you think we got money, we got nothing," Delgado said laughingly. "I mean, nothing."

Not quite nothing, but Delgado and Morales say they usually got $1000 or less.

They're now suing the Moores, alleging breach of contract, fraud and negligent representation, and their attorney, Kharazi, also represents the Shell station.

Delgado and Morales claim the Moores received almost $700,000 in settlements in cases where they were the plaintiffs, but they received less than 10 percent of that money.

"They end up with $1000 and then the attorneys and the lawyers get all the attorney's fees for the time they put in," Randy explained.

Randy Moore said, in reality, they were taking about half what they should've earned. And he denied scouting locations for disabled clients.

And Tanya Moore is fighting the misconduct claim in court.

She's said the video of Ronald Moore standing up proves nothing, and that Ronald never claimed he couldn't walk on his own, only that he has difficulty walking and risks falling if he's not in his chair and doesn't use a cane.

In two cases, judges have agreed.

In a third, the Zlfred's case, what the video means is still an open issue.