Arias Gets Life in Prison Without the Possibility of Parole 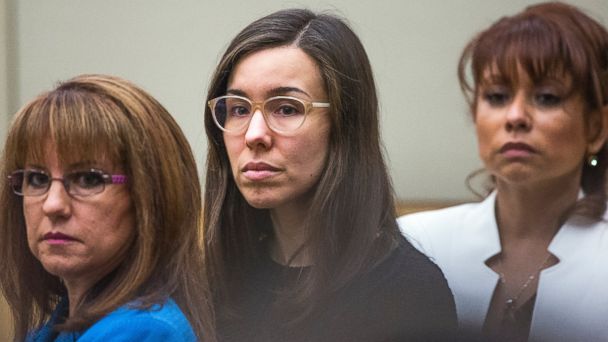 Jodi Arias has been sentenced to a natural life sentence with no possibility of parole.

Arias was found guilty in May 2013 of murdering her on-off boyfriend, Travis Alexander, five years earlier.

Because two previous juries were unable to decide whether or not she should receive the death penalty, the final sentencing decision was up to Judge Sherry Stephens at today's hearing. Stephens had to rule on whether Arias would serve her natural life in prison or have the possibility of parole after 25 years.

After hearing statements from Alexander's tearful sisters asking that Arias receive the maximum penalty available, the court also heard Arias' final plea to receive the possibility of parole in 25 years.

"It's my firm belief that death would bring me untold peace and freedom. If I die today, I would be free and I would be at peace," Arias said as she appeared in a prison jumpsuit in Maricopa County Court. "I realize how selfish it would be if I escaped."

Arias, who was convicted of first degree murder, maintained that Alexander was trying to attack her when she stabbed him multiple times and shot him.

"To this day I cannot believe I was capable of doing something that terrible," Arias said. "I'm truly disgusted and I'm repulsed with myself. I wish there was some way I could take it back."

Because two previous juries were unable to decide whether or not she should receive the death penalty, the final sentencing decision was up to Judge Sherry Stephens at today's hearing. Stephens had to rule on whether Arias would serve her natural life in prison or have the possibility of parole after 25 years.

Arias' testimony came after Alexander's relatives tearfully urged the judge to give the convicted killer the strongest possible sentence available.

"It hurts too much to remember him alive because if I remember him, I remember too much about how he was brutally taken from us and I can't handle it," Alexander's sister, Hillary Wilcox, said amid tears in Arizona's Maricopa County Court this morning. "This is what I've had to do so I can cope."

Wilcox said that sometimes when she does think of him, she is in the shower, and, "I know that's because that's where she killed him, so I have to quickly shake it out of my head and get out of the shower."

The second sister to speak, Tanisha Sorenson, turned and directly addressed Arias, citing Arias' earlier claims in her personal journal where she said the person who killed Alexander deserved to die.

"What happened to that, Jodi?" a tearful Sorenson asked as she faced Arias.

Sorenson also told the judge that she and her relatives have been harassed by Arias' supporters throughout the trial, saying that they "send me pictures of my brother's dead body, his autopsy photos, his blackened face and slit throat, to my email and my Facebook page. ... I did not ever think we would be victimized."

Alexander's relatives and friends were all seen wearing blue in solidarity.

Prosecutor Juan Martinez said that Alexander's relatives hope that Arias is sentenced to serve life without the possibility of parole "not because they want to be vindictive, but [because] as you have also seen, what happened in that bathroom was a butchering."

All but one holdout on the second jury wanted to give Arias the death penalty, jurors said. However, because a unanimous decision was not reached, Stephens was tasked with determining her prison sentence, and the death penalty was taken off the table.

Arias took the stand for a marathon 18 days in the first trial, which turned into a national spectacle with live coverage. Judge Sherry Stephens ruled that cameras were not allowed in court during the second trial, covering the sentencing phase, except for the reading of the verdict.