DINUBA, California (KFSN) -- The scene spanned blocks, and started at the Texaco gas station on Alta Avenue, where Dinuba Police say one of their officers interrupted an armed robbery and was shot at by two suspects. From there, police say one of the suspects jumped in a getaway car, while the other ran and continued to shoot at the officer.

The officer ran after the suspect, identified as 20-year-old Luis Vargas, through different apartment complexes to the east.

Police say the officer was able to shoot back and retreat as needed.

"It sounded like a shotgun and then I heard like a regular gun," said Mona Vargas, who lives nearby. "Yeah, so I kinda got scared."

After a door to door search, another suspect was arrested Friday morning, as police continue to search Friday night for up to two more suspects tied to the robbery.

"It's a very unfortunate incident, scary for our department and our officer," said Dinuba Police Chief Devon Popovich. "Our officer was very lucky with the exchange of gunfire. He was not injured."

Popovich said he gas station clerk was assaulted, but is expected to be okay. His officer is doing fine and has been placed on paid administrative leave during the investigation.

That officer was not called out to the Texaco for any reason, but rather, was simply in the right place at the right time.

Friday afternoon, our cameras were rolling as Dinuba Police and Tulare County Sheriff's deputies served a search warrant in an area about a mile away from the original scene.

But the chief said no arrests were made as a result of that search.

Police also recovered a suspect vehicle they believe was used as a getaway car during this robbery.

The Tulare County Sheriff's Office said the manhunt is over after an arrest was made for a robbery suspect.

Google Street View of the alleyway behind the La Precesa Market 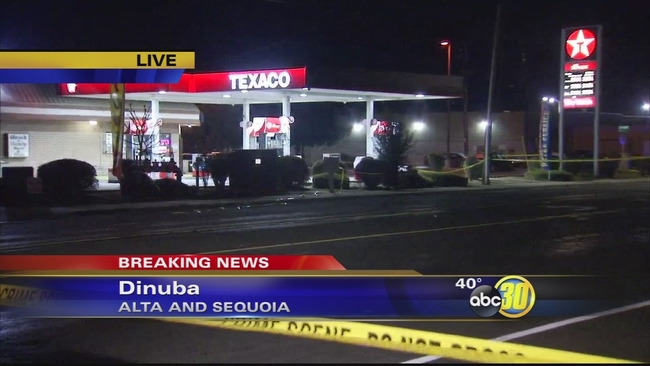