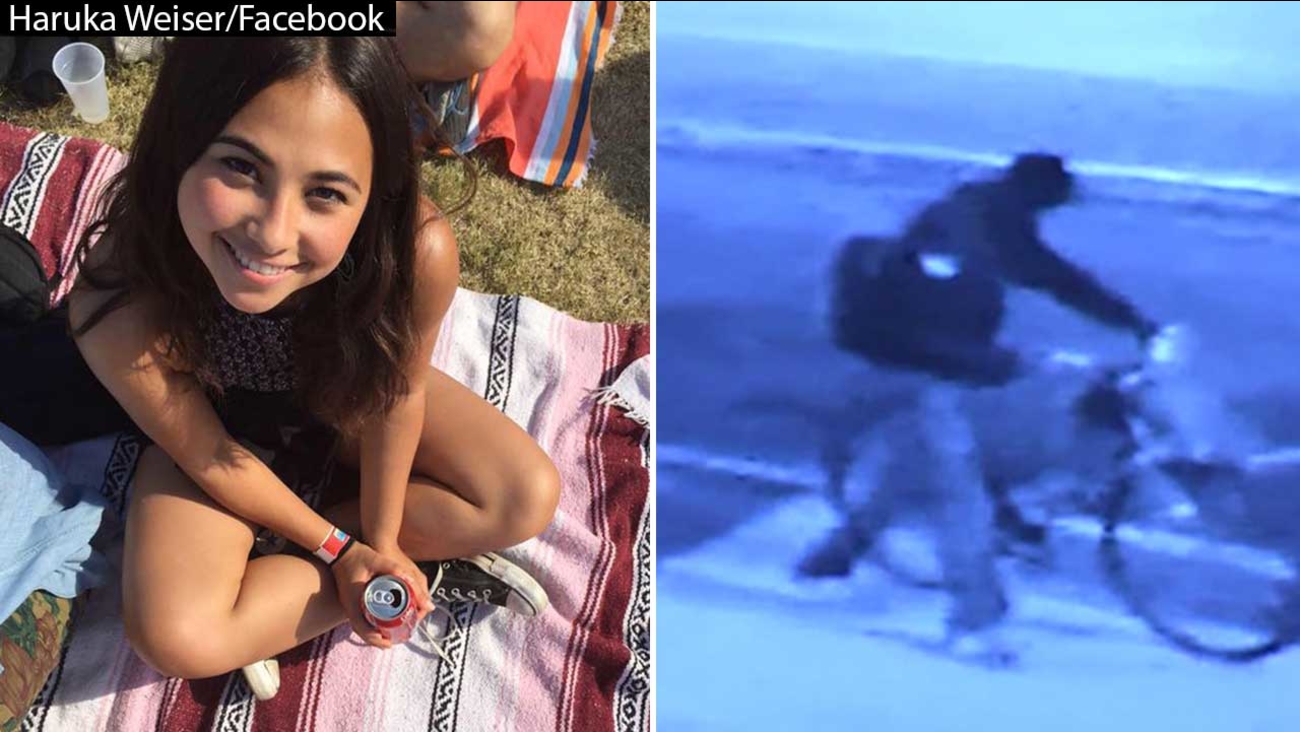 AUSTIN, Texas -- Investigators have arrested a suspect in the killing of a first-year dance student whose body was found in a creek on the University of Texas campus, Austin police said Friday.

The Austin Police Department said via Twitter that a suspect was in custody in the killing of 18-year-old Haruka Weiser and that more details would come during an upcoming press briefing.

Earlier Friday, the chief of police said investigators were sure that a man who appears in campus surveillance video pushing a bicycle is responsible for her death.

Austin Police Chief Art Acevedo said the campus has extensive video monitoring and that the timing and location of the man and "a lot of things we'd rather not talk about" indicate he killed Weiser on the Austin campus Sunday night. It was the first killing on school grounds since a bell tower mass shooting nearly 50 years ago.

"We're very confident, with a high degree of probability of confidence, that this is the person that, when we bring him in, that he'll be the person responsible for this act," Acevedo told ABC's "Good Morning America."

Police have not released details about how she died, although authorities have repeatedly underlined the brutality of her killing. An autopsy shows she was assaulted, but police have refused to elaborate, citing the ongoing investigation.

Weiser, of Portland, Oregon, was last seen around 9:30 p.m. Sunday leaving UT's drama building. Weiser's roommates reported her missing shortly before noon Monday, and her body was discovered Tuesday in a creek near the alumni center and football stadium, an area bustling with activity day and night.

During a somber news conference Thursday, UT President Greg Fenves said the "unthinkable brutality against Haruka is an attack on our entire family." Students who spoke later in the day at a vigil that drew hundreds of people on the Austin campus said the killing will leave them unsettled during their nightly walks home.

Gay played surveillance video of the man he described as a suspect pushing a red or pink bicycle north of the stadium around 11 p.m. Sunday. Gay said there was no indication that the man in the video was a student or that he specifically targeted Weiser. He said authorities believe the man was in the area for at least a couple of hours. He said no weapon has been recovered.

Weiser's was the first on-campus homicide since former Marine Charles Whitman climbed to the top of UT's bell tower on Aug. 1, 1966, and opened fire, killing 16 people and wounding scores of others.

In response to this week's slaying, the university has expanded programs in which police escort students across campus to ensure their safety. School officials also are urging students to walk in groups and avoid walking at night or while distracted with cellphones or headphones.

"To our students, you expect and deserve to be safe," Fenves said.

UT asked Austin police to lead the investigation with the help of the Texas Department of Public Safety, which has assigned 20 state troopers to campus per day, including some on horseback. DPS is also reviewing security on campus, including video monitoring, lighting and building security systems.

Gay said law enforcement is offering a $15,000 reward for information leading to an arrest.

Julane Stites, the artistic director at Dance West, a dance company in Beaverton, Oregon, which Weiser attended before leaving for Texas, said Weiser had "a dancer in her soul." She said Weiser headed to the University of Texas with the largest scholarship any Dance West student had received.

"She adored ballet, but she was also an amazing modern dancer," Stites said.

Weiser's family said she had planned to take on a second, pre-med major soon and to travel to Japan this summer to see family, according to Fenves.

"She was so happy to be a student at UT and was looking forward to the opportunity to perform again as a dance major," said Fenves, reading a statement from Weiser's family. "We know Haruka would not wish for us to be stuck in sadness but to keep living life to the fullest. That is what we will try to do in coming days."