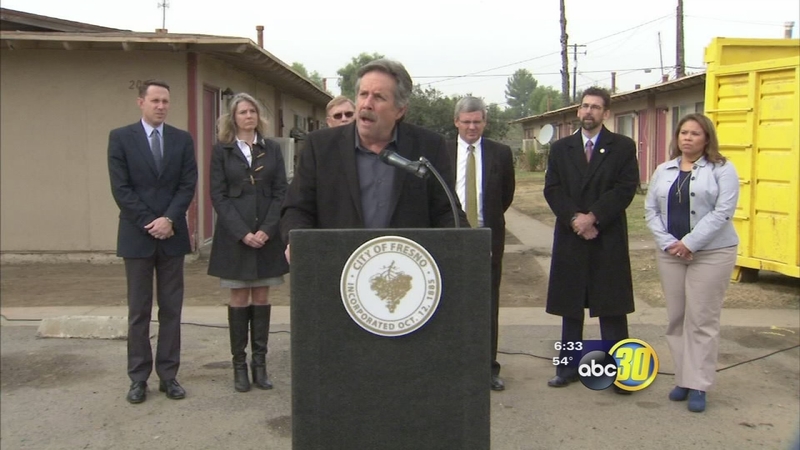 FRESNO, Calif. (KFSN) -- The city of Fresno said it's going after Fresno's slumlords.

City leaders admit they've allowed it to happen, but they want to stop apartment owners from neglecting their properties and leaving thousands living in horrible conditions.

The city announced a new code enforcement strike team Tuesday, with the goal of stopping trouble like we've seen for weeks now at the Summerset Village Apartments. "This is the first step in addressing wholesale change in how properties and apartment complexes are managed in this community," said Fresno city manager Bruce Rudd.

Construction crews dig trenches for new gas lines. An exterminator sprays his way through the entire complex. At the Summerset Village Apartments, some of these basic needs had been ignored for years. Forty-one apartments had leaky gas lines and the heat's been off for four weeks. But now that the fix is underway, city leaders are turning their sights to other apartment complexes where landlords are neglecting the same type of trouble. "Consider yourself on notice, over the next 45 days, you have an opportunity to make the right choice and correct those deficiencies before we identify them," Rudd said.

Rudd announced a new code enforcement task force, promising to go after the worst slumlords with two new inspectors checking on apartments. They'll be looking first at places with a history of code violations, or a lot of police or fire calls. Inspectors will mainly check the exteriors, including gas lines, but if things look bad, they'll try to get inside. If the landlords try to keep them out, they say they'll get warrants to inspect the interiors. And if the problems don't get fixed, city attorneys or the Fresno County district attorney's office could even file criminal charges. "I think that would be reserved for the worst offenders who are put on notice of what needs to be corrected at an apartment complex and they refuse to do it," said Fresno city attorney Doug Sloan.

At Summerset Village, it took weeks before any repairs started. But the city says owner Chris Henry is cooperating, and paying to fix the problems. "I would tend to think that would not be subject to prosecution unless the repairs stop and there isn't compliance in the future," Sloan said.

None of this comes in time to take away weeks of suffering for the people who call Summerset Village home. But with the Southern Baptist Convention offering hot food, and local refugee charities helping out too, they've learned to live in what many would consider unlivable conditions. "We have at least two blankets on and we have our own heater," said resident Amelia Padre. "They provided us with a heater, the firm."

Repairs here are expected to be finished before December 20.