Bodies of missing US Navy sailors found inside ship, US Navy says 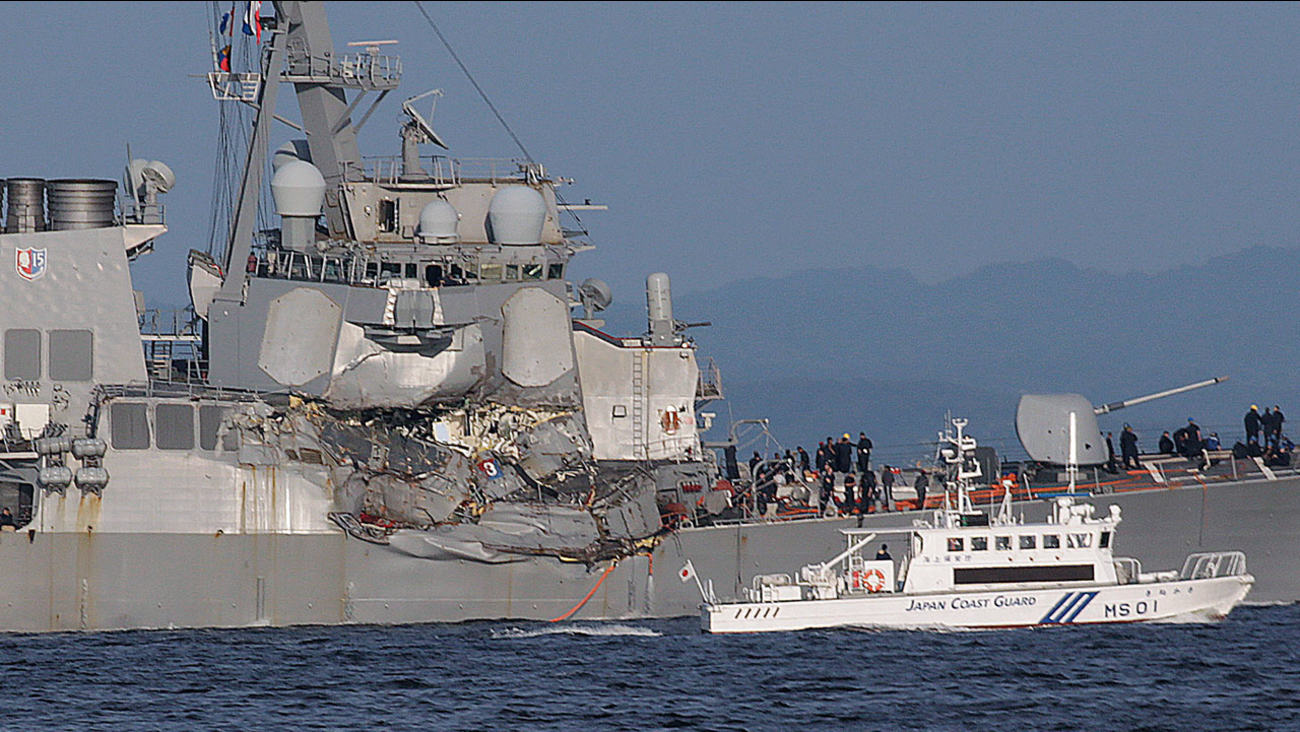 YOKOSUKA, Japan -- Navy divers found a number of sailors' bodies Sunday aboard the stricken USS Fitzgerald that collided with a container ship in the busy sea off Japan, but a spokeswoman said not all seven missing had been accounted for.

Searchers gained access to the spaces that were damaged during the collision and brought the remains to Naval Hospital Yokosuka where they will be identified, the Navy said in a statement. Seven sailors had been missing, but Yoko Kato, a spokeswoman for the U.S. Navy in Yokosuka, said not all were recovered.

She didn't say how many were found.

Japan's coast guard officials said the sea and air search was still continuing at the site of the collision, 56 nautical miles (103 kilometers) southwest of Yokosuka, home to the 7th Fleet.

The Navy said that the families were being notified and provided the support they need during "this difficult time." The names of the sailors will be released after all notifications are made.

Sixteen hours following the predawn Saturday collision, the damaged destroyer was pumping out water as it limped back to its home port in Yokosuka Naval Base south of Tokyo by sunset Saturday, its crew lined up on deck. The Philippine-flagged container ship was berthed at Tokyo's Oi wharf, where officials began questioning crew members about the cause of the crash.

At least three other crew members, including the captain, were injured in the crash, which damaged two berthing spaces, a machinery room and the radio room and exposed a mangled mid-right side of the ship. It wasn't clear how extensive the damage is below the water line.

Most of the more than 200 sailors aboard would have been asleep in their berths at the time of the collision.

"This has been a difficult day," Vice Adm. Joseph P. Aucoin, the commander of the 7th Fleet. "I am humbled by the bravery and tenacity of the Fitzgerald crew. Now that the ship is in Yokosuka, I ask that you help the families by maintaining their privacy as we continue the search for our shipmates," he said before the announcement that the bodies were found.

The USS Fitzgerald's captain, Cmdr. Bryce Benson, was airlifted early Saturday to the U.S. Naval Hospital in Yokosuka and was in stable condition with a head injury, the Navy said. Two other crew members suffered cuts and bruises and were evacuated. It was unclear how many others may have been hurt.

The Japanese coast guard said it received an emergency call from the container ship, the ACX Crystal, reporting the collision around 2:20 a.m. (17:20 GMT Friday). It was questioning crew members of the ACX Crystal, which is operated by the Japanese shipping company Nippon Yusen K.K., and was treating the incident as a case of possible professional negligence, said Masayuki Obara, a regional coast guard official.

"Thoughts and prayers with the sailors of USS Fitzgerald and their families," President Donald Trump said on Twitter. "Thank you to our Japanese allies for their assistance."

The ACX Crystal weighs 29,060 tons and is 222 meters (730 feet) long, the coast guard said, much larger than the 8,315-ton Navy destroyer. The container ship's left bow was dented and scraped, but it did not appear to have sustained any major structural damage.