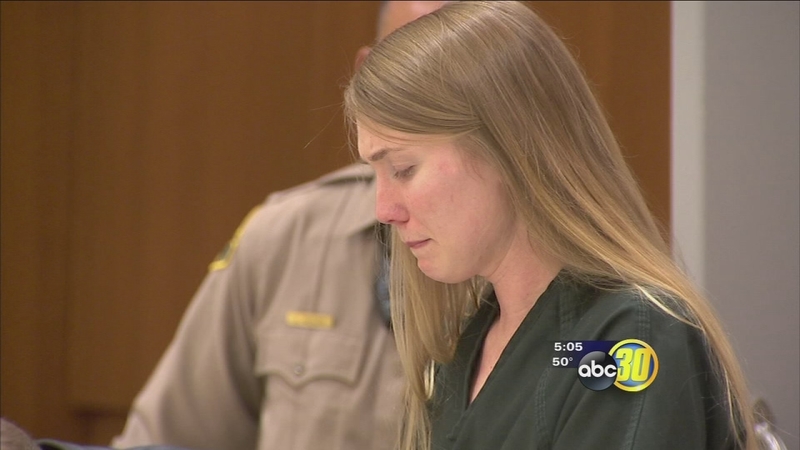 FRESNO, California (KFSN) -- A pregnant Clovis woman who caused a deadly crash while highly intoxicated will spend 11 years in prison.

Candice Ooley cried during much of the proceeding Monday morning. The victim's widow said she was living the American dream before the day everything changed forever.

The victim who died was a dairy farmer from Lemoore, and his wife said she would like to return to their home country of Portugal but she just can't bare to leave her husband who is buried here.

Luisa Pamplona, through an interpreter, tried to put into words what she lost the day Ooley wrecked into the Hummer they were riding in and killing her husband.

"I know she has a kid, but I don't have my husband either," she said. "She should have thought twice before she drinks."

Ooley said nothing, she only hung her head down and cried as Pamplona told her that a cemetery is where she has to go to visit her husband.

The 23-year-old was six months pregnant, with a blood alcohol level of 0.32 when investigators say she got into a fight with her boyfriend and started drinking before heading to her mom's in Coarsegold.

She did write a letter to the judge, but her words did not seem very sincere and remorseful to him.

"I believe that remorse is for her situation," judge Ernie LiCalsi said. "While you may read her letter one way, Mr. Martin, I view it as all about her."

Ooley's attorney, Dan Martin, pointed out the hardship for Candice's mother who is now left with caring for a newborn and Candice's disabled sister. But the judge said the baby girl may be better off now than with her mother.

"I question whether or not her daughter might be better off with her mother in prison given the indifference she's shown her while she was still in her womb," she said.

Before handing down the sentence the judge also told Ooley he didn't buy her remarks about having five shots of alcohol before getting behind the wheel. This is Ooley's second DUI. During the first arrest, her blood alcohol content was 0.25.

The district attorney had hoped for the maximum sentence of 13 years but said, in this case, there are no victories since everyone involved has lost a big part of their life.