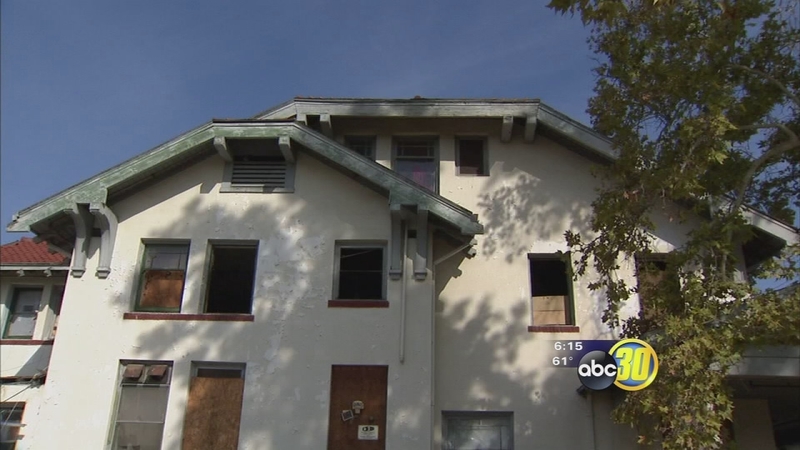 CLOVIS, Calif. (KFSN) -- While ghosts have long been reported to be banging around the old Wolfe Manor mansion, the noise today is coming from the living.

Melinda Dowling is saving what she can, using a hammer and chisel to remove the fireplace tiles.

"Well, they are old, and they are beautiful, and it's a shame for them to be thrown away," she said.

A last ditch salvage effort on this legendary haunted house is on and time is running out. Owner Todd Wolfe just received a notice from the city of Clovis to clear out his stuff. The house is coming down.

"They are giving me 24 hour notice that they are starting demolition sometime in the next 10 days," Wolfe told Action News.

Light fixtures, woodwork, including the main staircase have been salvaged. Windows have been removed. In addition to the fireplace tiles, Dowling saved some of the woodwork and the bannister from the front porch. She plans to transplant it to a cabin at Shaver Lake.

"So bits and pieces will be saved, but unfortunately the majority will be lost," she said.

The city of Clovis has decided this old mansion, which has served as a hospital, sanitarium, nursing home, Halloween attraction and favorite spot for TV ghost hunters is a public nuisance. They say owner Todd Wolfe has not been able to bring it up to code, so it's got to go. Wolfe has given up efforts to save it.

"The house had a beginning, 1922, and the house had an end," said Wolfe. "Today is my last day to be here. I am filling up my truck with a few last items and I am not coming back until the ground is leveled."

For those drawn to the old house, this was a last chance for a look around; a last chance to say goodbye to the house and whoever may haunt it.

While Wolfe will lose the house, he still owns the property it sits on. He is planning to lease the land to a hotel or restaurant chain. The city of Clovis could place a lien on the property to cover the demolition costs, or put an assessment on his property tax bill.
Demolition is expected to cost about $40,000.

The 8,000-square-foot mansion was built in 1922 as a private residence. It was lost in foreclosure a few years later and then used for a variety of medical care facilities. Old papers discovered in the house include patient care records from the 1970s when it was a nursing home. A Polaroid picture of one of the home's last patients was also found; it was dated 1990.