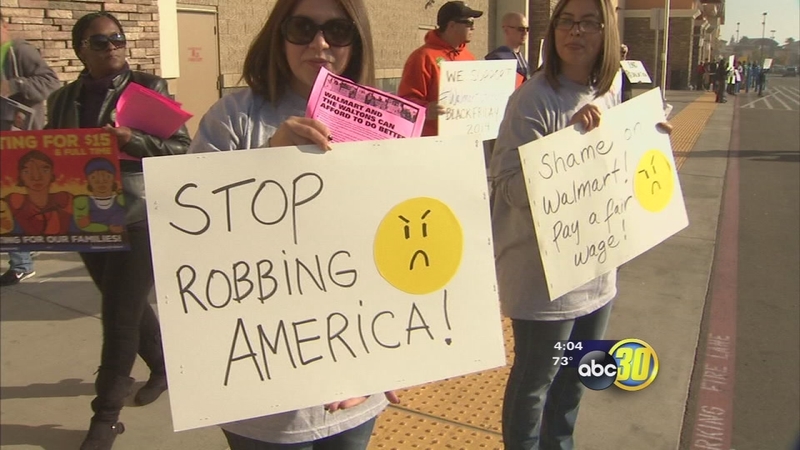 CLOVIS, Calif. (KFSN) -- Protests against Walmart extended across the country as union workers complained about low wages and a lack of benefits for Walmart's employees -- who are non-union.

The retailer saw its biggest Black Friday protests with demonstrations at more than 1,500 stores in 49 states. In Clovis, dozens of people lobbied for better pay and benefits, but they found some friction.

"Fair wages now," chanted the loud voices in Clovis demanding a bigger piece of the profits for Walmart employees.

Many workers say they struggle to make ends meet, despite working a steady job. One of the issues these protesters have raised is that Walmart is costing taxpayers money. In fact, they say each Walmart store in a community costs taxpayers $1 million a year in assistance to employees.

"The Walmart illusion is you save money, live better," said protester Georgette Carrillo of Fresno. "That's just an illusion because taxpayers are having to subsidize the employees' benefits."

Walmart cashiers across the country earn less on average than the California minimum wage at $8.48 an hour. That's much less than cashiers at Whole Foods and Costco, who earn $10.31 an hour and $11.59 an hour respectively, according to the National Bureau of Economic Research.

A Walmart spokeswoman told Action News other jobs pay better, and the protesters are not representative of the store's 1.3 million associates. In fact, we asked, and not a single associate participated in the Clovis demonstration.

And while many customers were receptive to the protesters' message, others were not.

"I love cheap stuff," said Nick Sciaroni of Clovis as he walked along the line of protesters and into the store. "I'm still going to shop here."

Sciaroni jumped at the chance to confront them directly, challenging their union-friendly message, and praising the Walmart business model.

"It's cheaper," he said. "They have everything I want. Their employees are happy. They treat me nicely. I'm going to shop here."

Some shoppers sympathized with the plea for more money, but figured anyone with a job should be thankful.

"I'm not sure how Walmart pays, but I'm sure it's better than nothing," said Gary Lowry of Clovis.

An Action News reporter did talk to some employees who didn't want to be on camera. They were generally happy to have jobs, but also welcomed the protesters trying to get them a little extra.