Confederate flag taken down in South Carolina after 54 years

AP
By JEFFREY COLLINS and MEG KINNARD
COLUMBIA, S.C. -- South Carolina pulled the Confederate flag from its place of honor at the Statehouse on Friday, marking a milestone in how America commemorates the war that tore the United States apart 150 years ago.

Many people believed the rebel banner would fly forever in the first state to leave the Union, despite bitter feelings that remained after the flag was demoted from atop the Capitol dome to a Confederate monument out front 15 years ago.

The battle flag unfurled to assert white power and protest the civil rights protest in the 1960s had been defended by white Republican leaders until last month as a symbol of Southern pride. After the church attack, even supporters felt compelled to acknowledge that the flag also represents racial hatred. 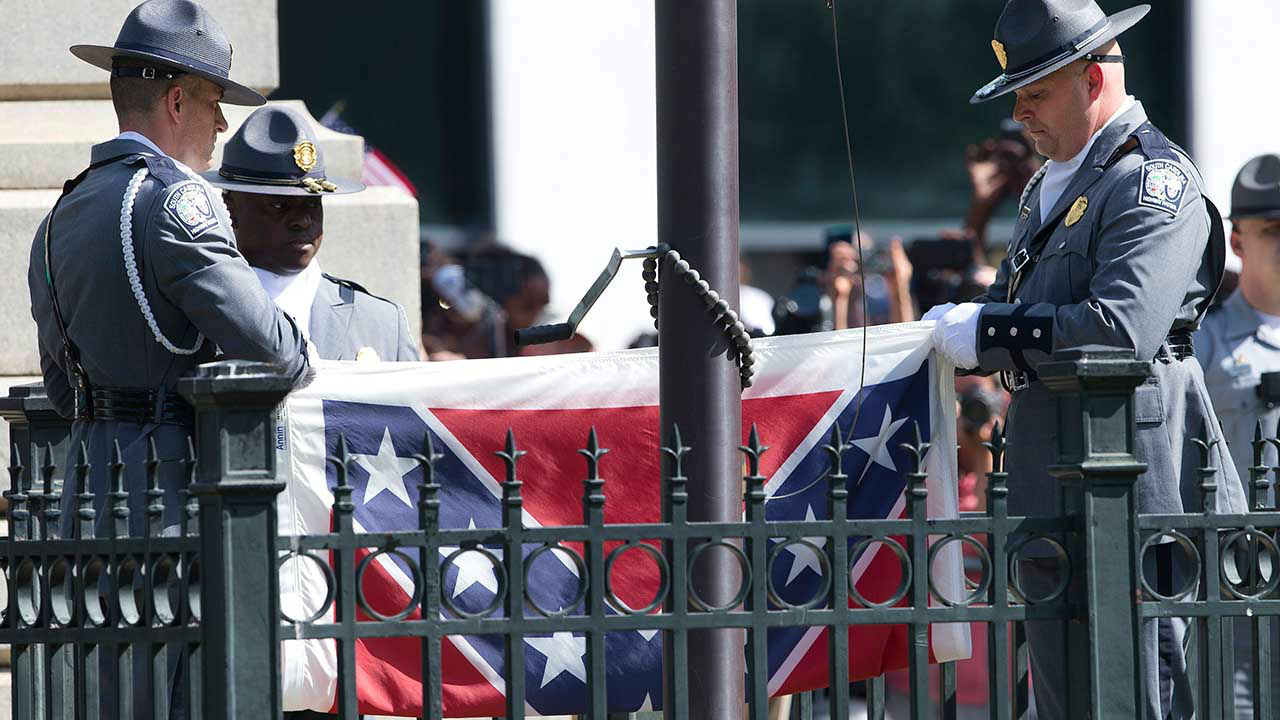 The flag came down Friday without incident, in a 6-minute ceremony, amid a crowd of up to 10,000 people chanting "USA, USA," and "hey, hey, hey, goodbye."

A multi-racial honor guard of South Carolina troopers wearing dress-gray uniforms and white gloves carefully folded and rolled it up. The flag was then taken to the state's Confederate Relic Room to be put in a new multimillion-dollar display. Later Friday, the 30-foot pole it flew on was yanked out after several mighty tugs from a crane.

Overseeing it all was an imposing statue of Benjamin Tillman, the South Carolina governor who went to Washington as a U.S. senator and proudly described how he undermined post-Civil War Reconstruction by killing black people who tried to vote in the 1800s.

Gov. Nikki Haley, who has national ambitions of her own, felt compelled by last month's killings to call for bringing down the flag, only months after calling her Democratic opponent's demand to do the same thing a "stunt." Other leading Republicans swiftly reversed their positions as well, and Thursday's final votes in South Carolina's Republican-led legislature were overwhelmingly in favor of removal.

As the flag came down, Haley joined family members of the victims and other dignitaries on the steps of the Statehouse, and while she didn't speak, she nodded and smiled after someone in the crowd shouted: "Thank you governor."

President Barack Obama tweeted minutes later, calling it "a sign of good will and healing and a meaningful step towards a better future."

The leader of the South Carolina chapter of the Sons of Confederate Veterans refused to attend, instead recalling his seven ancestors who fought for the South in the Civil War. "I'm not going down there to watch them be dishonored and defamed," Leland Summers said.

But if South Carolina couldn't make a last stand for the Lost Cause, where else might it happen? From Alabama to Alaska, Confederate and segregationist monuments, statues, symbols and place names are being re-examined.

"They aren't going to be happy until Mississippi is just like Michigan," said Nelson Waller, who joined several dozen flag supporters in a rally at the Statehouse earlier this week, but said he was too heartbroken to see it taken down.

Two white troopers neatly tied the rolled-up flag with a white ribbon, then handed it to a black trooper who marched it away. But Highway Patrol Cpl. Rupert Pope downplayed the significance of their race.

The same seven-man honor guard carried state Sen. Clementa Pinckney's coffin into the Statehouse for a viewing last month. Pinckney also led the Emanuel African Methodist Episcopal Church in Charleston, where he and eight others were gunned down during their Bible study.

Police arrested a white gunman who had posed with Confederate flags, and called it a hate crime.

Family members of the slain churchgoers were given prime spots to watch the flag's removal, joined by a crowd of between 8,000 and 10,000 people, according to Sherri Iacobelli of the state Department of Public Safety.

Denise Quarles, who lost her mother, Myra Thompson, said "the Emanuel 9" were surely smiling down from heaven.

"The tragedy was a tragedy. But now on the other side of that tragedy, we see a lot of positives coming out. Maybe people will change their hearts," Quarles said.

Lawmakers in other states are targeting other symbols. The Mississippi flag includes the rebel battle flag, and Georgia's incorporates another Confederate design. Thousands of Southerners drive cars with license plates featuring the rebel banner, which was quickly banished from Alabama's capitol and federal cemeteries since the shootings.

In Memphis, Tennessee, officials are working to remove the remains and a statue of slave trader, Confederate general and Ku Klux Klan founder Nathan Bedford Forrest from a prominent city park.

The South Carolina NAACP is not calling for the removal of monuments, but it does want them to tell larger truths.

For example, Randolph said, the Tillman statue should also note that he was responsible for a mob that killed six blacks in 1876 and put their bodies on display as a warning against trying to vote.

"South Carolina has an unfortunately distinction of breeding bad people. I'm not going to criticize any of them, but you know who they are. All you have to do is go outside and look at the monuments," Randolph said.

South Carolina's leaders first raised the battle flag over the Statehouse dome in 1961 to mark the 100th anniversary of the start of the Civil War, then kept it there as blacks asserted voting rights and demanded an end to racially discriminatory laws. More recent legislative battles over claims that blacks are being disenfranchised have taken place under its shadow.

"It feels so good to be out here and be happy about it," said Ronald D. Barton, a 52-year-old pastor who recalled being filled with anger during the 2000 ceremony that moved the flag from the dome to the pole. That year, a much larger crowd screamed and yelled at flag supporters, as Civil War re-enactors raised the banner again.
Related topics:
south carolinaconfederate flagracismu.s. & worldcharleston shooting
Copyright © 2020 by The Associated Press. All Rights Reserved.
RELATED 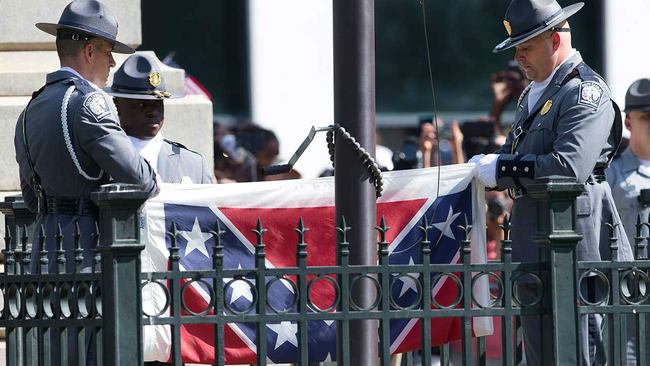