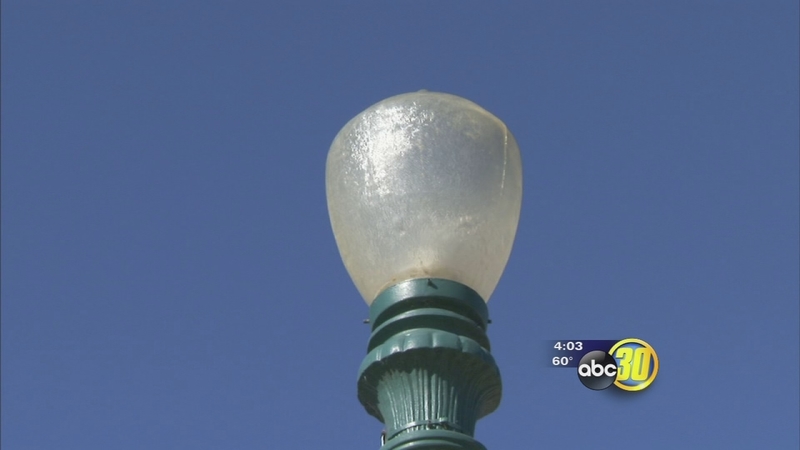 The city's effort to secure streetlights from copper wire thieves is working.

FRESNO, Calif. (KFSN) -- The city's effort to secure streetlights from copper wire thieves is working, and it should be a "brighter" holiday season in Fresno.

Two years ago the city faced a crisis. Four thousand street lights were out across the city, most due to copper wire theft. An aggressive program was launched by the city to secure the light posts. The fixes weren't too obvious until the city started fixing the old, decorative fixtures. For Tower District resident Lynn Tripp, getting the street lights back on was a big deal.

"Most of this whole street was out because people would steal the wires," Tripp said. "So, I'm glad they did something about it."

The city's fix involved blocking access to the wires, "and so we installed steel bases around the bases," said Public Works director Scott Mozier. "And it was really the only fix that could be made."

"On one of the older streetlights that has not been fixed," an Action News reporter said. "You can see why it's important to put these metal collars around them because, without it, thieves can get right in and pull out the copper wiring."

"We had a crisis, for example, in downtown of the 500 decorative street lights that do truly provide the roadway lighting," Mozier said. "Two hundred of them were out at one time, so over 40 percent of the area was dark and the same was occurring in the Fresno High community."

Nearly all of the 2,600 old-style lights have been fixed, along with the more than 40,000 more modern lights. In the newer lights, the access to wires was welded shut, or the sidewalk access was filled with cement.