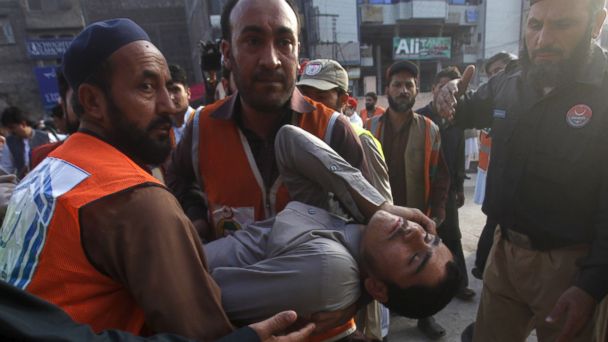 The death toll is still in flux, with The Associated Press now reporting that more than 150 people died as a result of the quake. The AP cites Pakistani officials who say at least 147 people were killed and about 600 others were injured, while Afghan officials say 33 people died in their country and more than 200 others wounded.

The victims include at least 12 students at a girl's school in Afghanistan's Takhar province, and five people in Pakistan's Khyber Pakhtunkhwa province have reportedly died in collapsed houses, according to a rescue official. One other person died because of a fallen roof, according to state-run Pakistani TV.

U.S. Geological Survey listed the earthquake in Afghanistan at an "orange alert level."

"Significant casualties are likely and the disaster is potentially widespread," the agency said. "Past events with this alert level have required a regional or national level response."

"Being deeper helps negate the impact at the surface, because it has to travel further to get to the surface," Reeves said.

About 931,807 people live within 62 miles of the quake, according to the Global Disaster Alert and Coordination System.

A building has reportedly fallen down in Peshawar, and most of the damage is likely in northern Pakistan. There are also reports of land sliding there and the wall of a school has collapsed, injuring children in a city near Lahore.

The U.S. Embassies in Pakistan and Afghanistan have released statements extending condolences to the victims. The embassy in Islamabad, Pakistan also reported that they are unaware of any U.S. citizens "directly impacted by this earthquake."

"The U.S. government has been in touch with the governments in Afghanistan and Pakistan, and we stand ready to provide any additional support that may be needed," White House spokesman Josh Earnest said today.