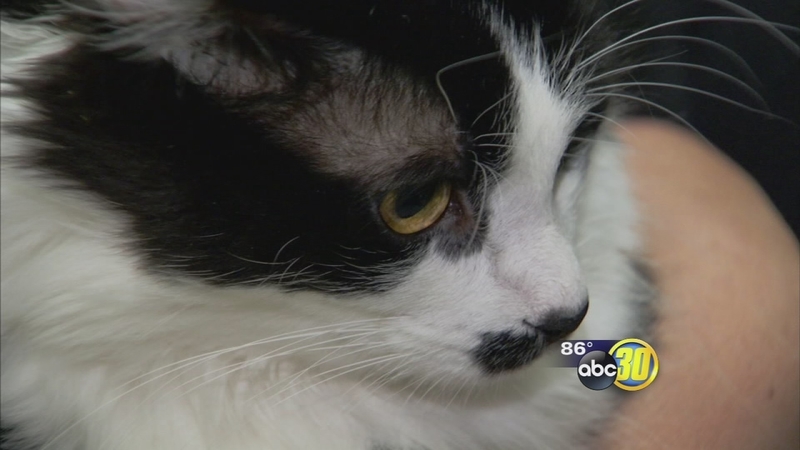 FRESNO, Calif. (KFSN) -- Hundreds of kittens and cats that have passed through the Central California SPCA are at risk of contracting a virus that could lead to death.

Jamie Bennett's 2-year-old cat Noah is fighting for his life while hooked up to an IV.

Noah contracted panleukopenia - a virus similar to Parvo for dogs. He got the disease from Bennett's 2-month-old kitten Bernie.

"I just wanted him to have a friend and that's the reason I went to PetSmart because the other kitten has a mustache just like he does," Bennett said.

Bernie had to be put down because of the virus. He was one of the animals from the Central California SPCA up for adoption at the pet store.

Walter Salvari with the SPCA says there was an exposure at their facility.

"Hundreds of cats were exposed to this," he said.

Staff spent the afternoon hours Thursday quarantining rooms and kennels in its five buildings to keep it from spreading.

"We are pretty much going out there and cleaning up with a chemical called Accel and it should kill the virus in 10 minutes," Salvari said.

Salvari says so far so far six cats have died from the virus, all of them were adopted from the center.

"It's very sad to see that this is happening here, we take over 30,000 animals a year so there's a ton of animals coming through our doors," he said.

Salvari says stray animals taken in who are not vaccinated carry the virus.

"When they come out come into the shelter, we do vaccinate upon intake but at times they're already exposed by the time they come in."

Bennett hates this has happened to her, and she is hoping it won't happen to anyone else.

"It's a deadly, highly contagious disease," she said. "I just wanted him to have a friend."