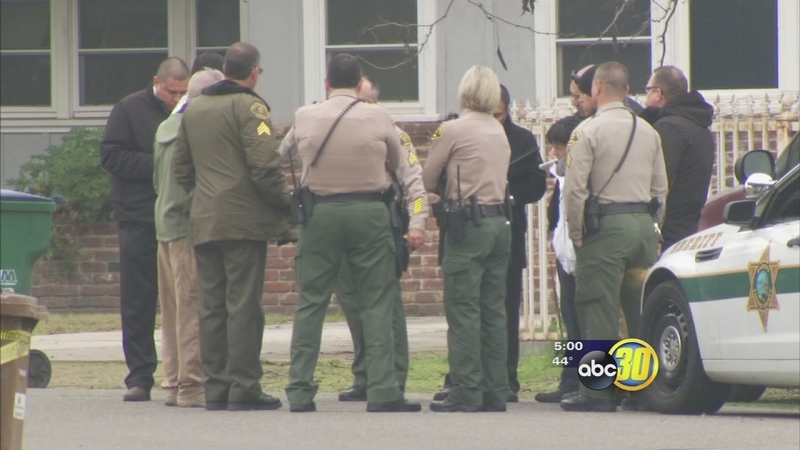 FRESNO, Calif. (KFSN) -- Fresno County homicide investigators say a 911 call Monday morning led to the discovery of a woman's body and a suspect threatening to kill himself.

Around 6 a.m., a next door neighbor heard a single gunshot. Not long after, deputies who showed up also heard gunfire before they forced their way in. Holiday spirit seemed to be alive and well at the home where deputies received a 911 call.

"The caller stated that there was a person at this house on the 1000 block of South Rogers Lane," Tony Botti with the Fresno County Sheriff's office said. "He was claiming to kill himself and that there was already someone dead inside the house."

Deputies forced their way through the front door after hearing a single gunshot. The suspect, who neighbors identified as Stan Pipes, surrendered peacefully. A childhood friend of the suspect's showed up at the home. He says he ran into the couple a few weeks ago at Von's

"He introduced me to his fiance, Kris, and they both seemed like jovial people," Pipes' friend Lance Wirth said. "They had invited me to meet with them some time for a little dinner gathering, which I never followed through on."

By mid-afternoon, crime scene processors hauled away evidence from the home, including a rifle and computer taken during a search warrant. Investigators are trying to figure out what led to the early morning murder.

"Obviously, they are talking with witnesses," Wirth said. "This neighborhood, a lot of people know each other, which can be very helpful for them. So, to get those statements of 'who were these people, did you notice anything?'"

Neighbors described the suspect as quiet and kept mostly to himself, but since he was raised in the area many knew him and his family.
Related topics:
fresno countyhomicide investigationfresno county sheriff departmenthomicidefresno county
Copyright © 2021 KFSN-TV. All Rights Reserved.
FRESNO COUNTY