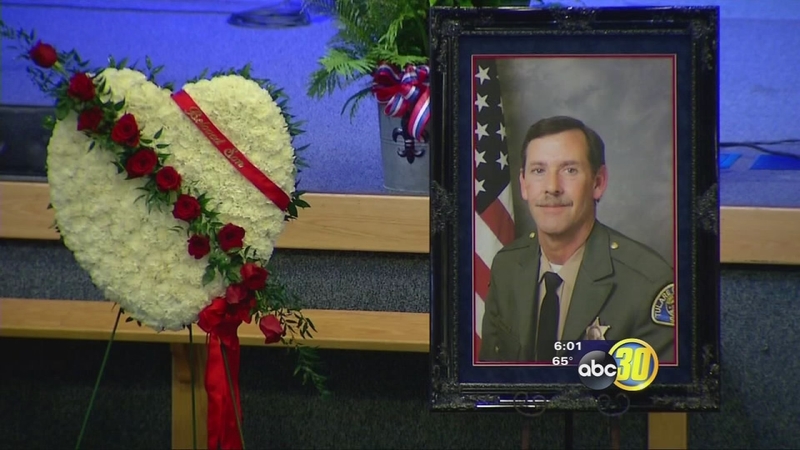 VISALIA, Calif. (KFSN) -- Hundreds of people took the time to remember and honor the life of fallen Tulare County Sheriff's Deputy Scott Ballantyne in Visalia Monday morning. Ballantyne died on February 10th when the plane he was in, Sheriff's One, crashed into a hillside east of Porterville. His friend and partner, sheriff's pilot James Chavez, also died in the crash.

Ballantyne made the ultimate sacrifice, and for that, he was honored with high praise and respect by the sheriff and all of those who attended the funeral Monday. The night of the crash, Tulare County Sheriff Mike Boudreaux knocked on the door of Jean Ballantyne to tell her that her son was dead. "I sat with Jean and she explained she already knew in her heart that her son was gone. Not because anyone had already told her. She said, because a mother's intuition."

Sgt. Michele Price, a casket bearer, has also sat down with Mrs. Ballantyne since her son's death. "She said, 'I just want Scott to be remembered and not forgotten.' Mrs. Ballantyne, I can promise you that will never happen. You will be our family now and you will always be in our hearts and prayers, just like Scott will be."

At a funeral for him Monday, Ballantyne, 52, was remembered as an experienced deputy who liked nothing more than going after the bad guys. Most recently, from the skies. "He risked, and ultimately, he gave his life to keep us safe," said Kamala Harris, California Attorney General.

He filled many roles during his 27 years with the department, and eventually got his dream job as a tactical flight officer with Sheriff One. Price said his partner, pilot Chavez, was more than just a co-worker. "They were a great great team and they loved being together, and James thought the world of him, and they worked closely this last year and a half flying sHeriff One," said Rick Mccullough, James Chavez's pastor.

Two days after Chavez's funeral, his longtime pastor Rick McCullough came with Chavez's wife, Missy, to pay respects to deputy Ballantyne. He said the support for both families must continue for months to come. "Down the road, more than maybe even this moment. The support system, a lot of activity around our homes, but it will get quiet, and they will need the love and support of friends," said Mccullough.

This is about remembering Ballantyne and this moment, but it's also looking forward and paying tribute to him by being one of the good guys.

Ballantyne and Sheriff's pilot James Chavez died January 10 when their plane, Sheriff One, crashed into a hillside east of Porterville.

After the funeral, the department met again at the Visalia Public Cemetery with the final farewell. Ballantyne's journey to his final resting place was a difficult ride for his mother.

Sheriff Mike Boudreaux presented her with the flag that draped her son's casket. "It's a tender moment," Boudreaux said. "It's much needed on both sides for healing I think."

A helicopter formation above gave a fitting tribute to the sacrifice he made while on duty February 10. Investigators still don't know what caused the plane to crash.

The deputy's service drew several to the streets to thank Ballantyne for giving all in service to the people of Tulare County. "We have a lot of respect for our law enforcement," Visalia resident Joshua Bulger exclaimed. "I think at times like this when families are hurt and our community is feeling it, that we need to come out and make a difference. Doesn't matter if it's one of us showing up or all of us showing up."

Father and daughter waving flags to honor fallen deputy. Her husband is a TC deputy so the loss has been tough. pic.twitter.com/L2vxVeyg7G

A few hundred students from Willow Glen lined up on Akers Street waving flags, and around the corner Ron Griswold waited hours to honor the fallen deputy. "They do such a good job for us," Griswold said. "Nothing but the greatest respect for them. I think they are a great group of people."

The Patriot Guard Riders of Tulare County held flags in appreciation of Ballantyne's dedication. "These deputies risk their lives every day for our safety and this is our way of showing all the other officers and the other family members the honor," Robert Ayers with the riders said.

Although many will carry deep voids, the sheriff said deputies must now begin to move on, but always remember their friend and brother. "We best represent those who have fallen by going out and working hard to preserve their memory and preserve what they were doing," Boudreaux said.