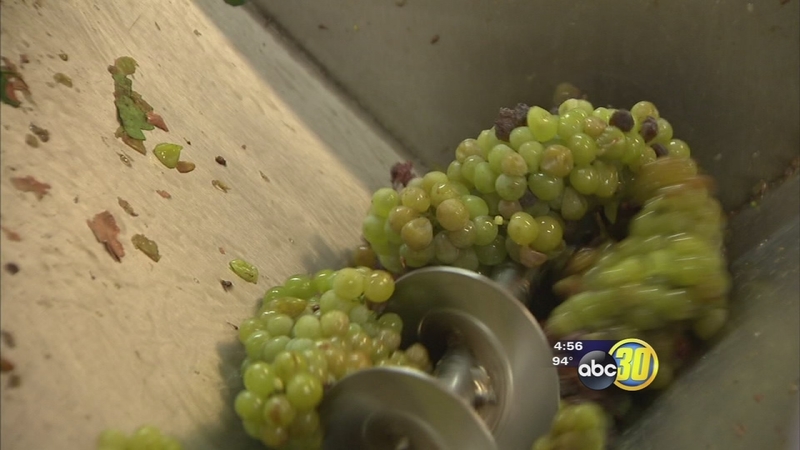 FRESNO COUNTY, Calif. (KFSN) -- The drought means harvest time in the Valley's grape vineyards is a little early this year, but winemakers are expecting healthy crops.

The grapes at Cedar View Winery near Sanger are being harvested about two weeks early this year. The lack of water has the crop maturing early.

"Normally we get surface water from the Kings River via Alta irrigation as much as we want from May through August. This year nothing. Not a drop," winery owner Jim Van Haun said.

Van Haun has rationed his well water and so far says the dry conditions over the past three years has stressed the vines but may actually help the wine. He said, "Actually a little bit sometimes. The 13 and 14 crops could be stellar, the 15 could be right there as well."

The grapes brought in Monday will be blended into the wineries' Tres Blanc variety. Enologist and Chemist Nick DeHart is making sure it's right. He explained, "My job is to do chemistry analysis on the grape juice and wine and make adjustments as seen fit. So mainly our goal is just to make good wine."

With the winery just steps from the vineyard, DeHart notes it's an instant contrast from hard work to science. He said, "The transition is seamless. One minute we are out just doing physical labor, and then the next minute I'm in here doing equations and calculations, so it's very much hands on as well as academic as well."

The Central Valley produces 75 percent of the state's wine, mostly through the big producers, but Cedar View is one of the dozens of small wineries giving the region recognition as a producer of fine wines.

Van Haun grows nine varieties on his 10 acres at Cedar View and has been recognized as one of the best. He said, "Ninety-five medals so far in the past six or seven years. Our Alacante Bouchet just won best wine of the region up in Sacramento at the state fair, so yeah, we do pretty well."

Winemaking may sound romantic, but as you can see it can be hard and dirty work. But if people like the wine, Van Haun says it's all worthwhile. He said, "I think at the very end of the road when people consume it and say 'good job,' and say 'that's the best Vigonie I've ever had in my life or the best Syrah,' that sort of thing, I think that really is the ultimate in gratification. Because you've grown the grapes, you've made the wine, you've aged it, you've bottled it and finally to that point where the consumer reacts."

While the vineyard has survived three years of drought, like every other grower in the Central Valley, Van Haun is hoping for a wet winter.