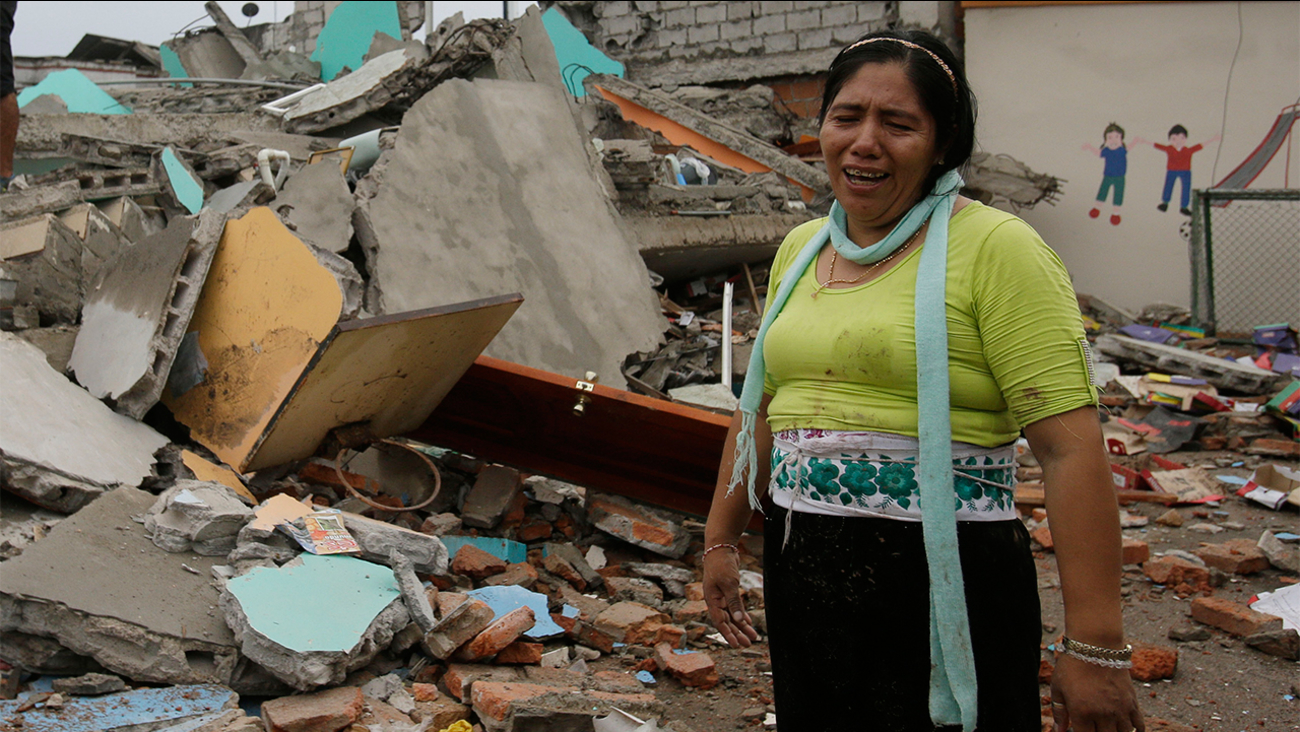 A woman cries as volunteers search for the body of her daughter amid the debris of a destroyed house in Pedernales, Ecuador, Sunday, April 17, 2016. (Dolores Ochoa)

QUITO, Ecuador -- Rescuers in Ecuador pulled three people out alive on Monday after being trapped for more than 32 hours in the rubble of a shopping center that was flattened by this weekend's powerful earthquake.

Televised images of the dramatic pre-dawn rescue in this port city gave Ecuadoreans hope that some of the scores of people still unaccounted for may yet be found even as the death toll from Saturday's 7.8-magnitude quake, the worst to hit Ecuador in decades, climbed over 350. An American and two Canadians were among those confirmed dead.

To reach the survivors trapped between the floor and roof of the collapsed shopping center in Manta, firefighters cut a nearly 2 -foot (70-centimeter) hole through concrete then pulled a woman out head first. A group of firefighters applauded as she emerged from the debris, disoriented, caked in dust and complaining of pain but otherwise in good health.

Later, at the same site, a group of 50 rescuers working with sniffer dogs, hydraulic jacks and drill managed to free another woman and a young man. All three were rushed in ambulances to a nearby hospital. Authorities said another woman remained trapped and was being given water and other supplies while rescuers attempt to remove a heavy concrete slab pinning down her legs.

Christian Rivera, the head of emergency services for the capital, Quito, said that depending on the circumstances a person without serious injuries can survive up to a week under the rubble.

"After that, there's a quick decline ... and the rescuers' work becomes very difficult," he said.

Still, there are good reasons to believe more people will be found alive in the coming hours as some 450 rescue workers from Spain, Peru, Cuba, Bolivia, Venezuela, and elsewhere reached the most-affected areas along the Pacific coast. The U.S. has also offered assistance but so far President Rafael Correa, a strong critic of U.S. foreign policy in Latin America, has yet to respond publicly.

"Our grief is very large, the tragedy is very large, but we'll find the way to move forward," the Ecuadorean leader said, adding that the quake was the worst to hit the country since a 1949 earthquake in the Andean city of Ambato that took more than 5,000 lives. "If our pain is immense, still larger is the spirt of our people."

Manta, a thriving port city, was among the hardest-hit areas. Power cables were strewn across city streets as electricity in many neighborhoods remained down. Among the many building that were flattened was a control tower at the airport that was home to U.S. anti-narcotics missions in South America until Correa kicked the Americans out.

As rescuers scrambled through the ruins near the epicenter, in some cases digging with their hands to look for survivors, humanitarian aid began trickling in. More than 3,000 packages of food and nearly 8,000 sleeping kits were delivered Sunday.

The quake knocked out power in many areas along the coast and some who fled to higher ground fearing a tsunami had no home to return to or feared structures still standing might collapse. The country's Geophysics Institute said it recorded 230 aftershocks as of Sunday night.

Spain's Red Cross said as many as 5,000 people may need temporary housing after the quake destroyed homes, and 100,000 may need some sort of aid.

State Department spokesman John Kirby didn't identify the American who was killed but said the U.S. government will work with Ecuadorean authorities to locate and ensure the well-being of all Americans. The area of pristine beaches where the quake struck is popular with American tourists and expat retirees.

Aggravating matters were reports of looting, including in Manta, where 180 prisoners from a nearby prison escaped amid the tumult. Authorities said some 20 inmates were recaptured and others returned voluntarily
Related topics:
earthquakeu.s. & world
Copyright © 2020 by The Associated Press. All Rights Reserved.
U.S. & WORLD