Family, friends, and staff pay tribute to one of the victims killed in the Skylife helicopter crash 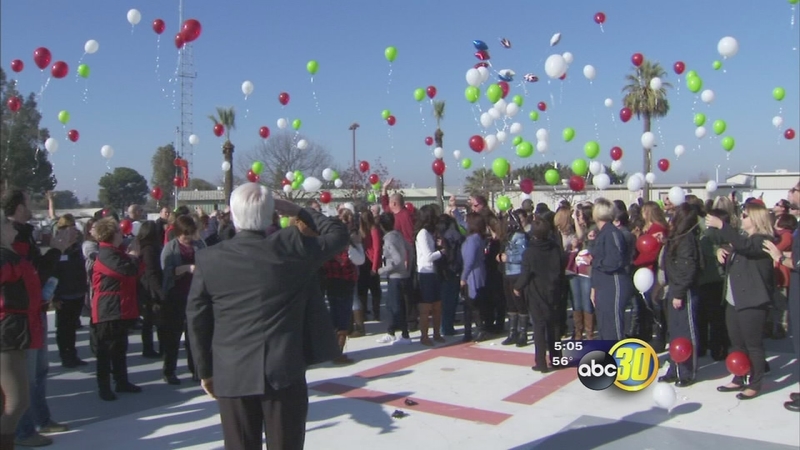 Family, friends, and staff pay tribute to one of the victims killed in the Skylife helicopter crash

HANFORD, Calif. (KFSN) -- A touching tribute for one of the victims in last week's Skylife helicopter crash in the South Valley. Marco Lopez's loved ones released balloons in his honor Friday at the place near where he used to work.

Fellow emergency responders, family members, and friends gathered near Hanford's old hospital to say goodbye to 42-year old Lopez-- a jokester, caring soul, and hard worker. "We felt this was the most appropriate because this was where we all initiated meeting him in the old emergency room and felt this helipad would be the most appropriate place to do justice for him," said Ryan Casey, friend.

Lopez was a flight nurse. He was killed with three others last week when the Skylife helicopter he was in crashed in Kern County. Many who loved him signed a frame to write him a goodbye message. Then, those dozens of people gathered on the helipad to share memories full of laughter and tears. "He became my very best friend. I called him poppy and he called me mommy. And I miss him so much and I just love him, he was wonderful," said Skylife employee.

"He served his community, he was serving a patient trying to get her help and passed in the process," said Terry Cardona, Adventist Medical Center.

Fellow nurse Jesse O'Grady said he was heartbroken when he heard his friend and fellow Navy veteran had been killed. "The only thing that brought me any comfort is even if he knew hew was going down that night he still would have suited up and still would have gone on that plane-- that chopper-- so someone else wouldn't have to."

After many spoke all together, fellow Skylife employees, nurses, and emergency room staff-- Lopez's sister and his friends-- released dozens of balloons into the air in his memory.

Family and friends wrote personal notes on these cards attaching them to the balloons before they were released.