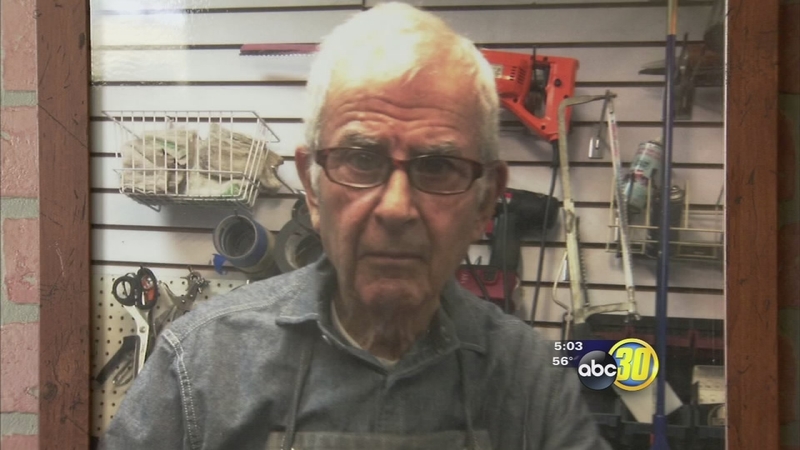 The family of a Fresno cobbler killed during a robbery held a memorial on the anniversary of his death.

George Sheklian's family said he wouldn't have wanted a somber event in his honor, rather a celebration. One year later his son, and police, are still looking for answers and the suspects who took George's life.

Sheklian's son Arsen has spent the last year taking over the workload of his late father's shoe repair shop. He's expanded and modernized the business and added numerous surveillance cameras to enhance security. Still, he feels the loss of his dad's positive presence. "We have good days we have our bad days," Arsen said. "Especially me, I was here with my dad every day, he was my best friend."

A best friend taken in a brutal and cruel way. George Sheklian, 85, was bringing coffee over to the owner of a neighboring gun store when two armed men knocked Sheklian to the ground, killing him, as they were robbing the store.

Fresno police discovered three of the guns stolen from the store several months ago. Last month, they picked up a new lead and are positive they will solve this case. "Actually the information we have we've narrowed our focus on two individuals that are believed to be responsible for the robbery and murder," said Fresno Police Chief Jerry Dyer.

Authorities say the department is confident it has the right people, but they need a witness to prosecute the case successfully. "We need someone to come forward and be a good witness and do the right thing," Dyer said.

As police continue investigating, Arsen said a celebration will be held in his dad's honor. On the one-year anniversary of his death, he says his dad wouldn't want a sad memorial but a lively event instead. Arsen hopes the party will also help his family take back Christmas while commemorating 52 years of business in Fresno.