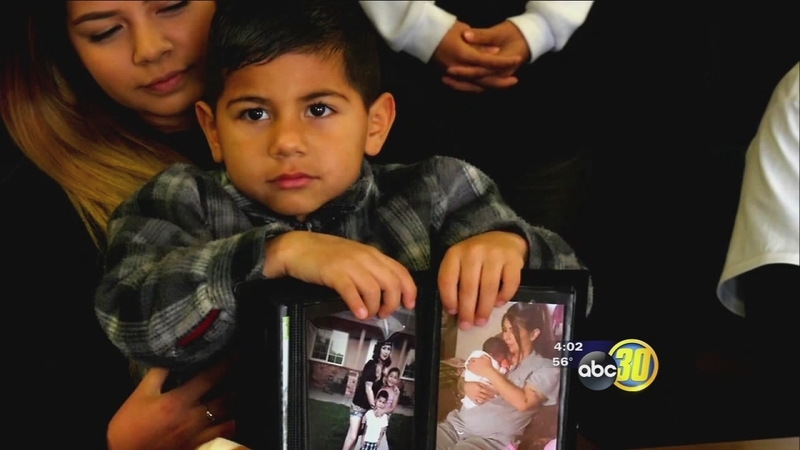 VISALIA, Calif. (KFSN) -- One month later, and still no arrests in the Vanessa Oviedo murder case. The 27-year-old mother of four was 35 weeks pregnant when she was shot twice in the head while sitting in a car at this intersection.

Visalia Police Detective Celeste Sanchez said Oviedo was not the intended target of the gang-related shooting. But her boyfriend, the driver of their car, was.

Oviedo boyfriend was shot in the leg, and drove to Kaweah Delta, where Oviedo's baby was delivered by emergency c-section.

Oviedo died at the hospital.

"We know that there are people out there who have information, there just hesitant in coming forward. And we're just asking them at this time, to please come forward, because we need to bring closure to her family," said Sanchez.

About a dozen of Oviedo's family members gathered with the media on Thursday. To talk about their loved one, and what she meant to them.

"And she always, like, lived every day like it was her last. She never took anything for granted, she was always nice, she always took people in," said Ebony Villa, Vanessa's sister.

Oviedo's oldest children were also present, including five-year-old Zayden, who showed us pictures of his mother.

"And it hurts me, but I see her everyday when I see them," said Ramiro Oviedo, Vanessa's dad.

Melinda Molina is the grandmother of Oviedo's youngest children, including the baby boy who survived the tragedy, Asiyas. At five weeks old now, she says he's a healthy, growing baby.

"But when he smiles he has her smile. Since he was born, I noticed that, that he had his mom's smile and her mouth."

Oviedo's four children will not have their mother for Christmas. But her family hopes someone can at least come forward with information about her death so they can start to find closure.