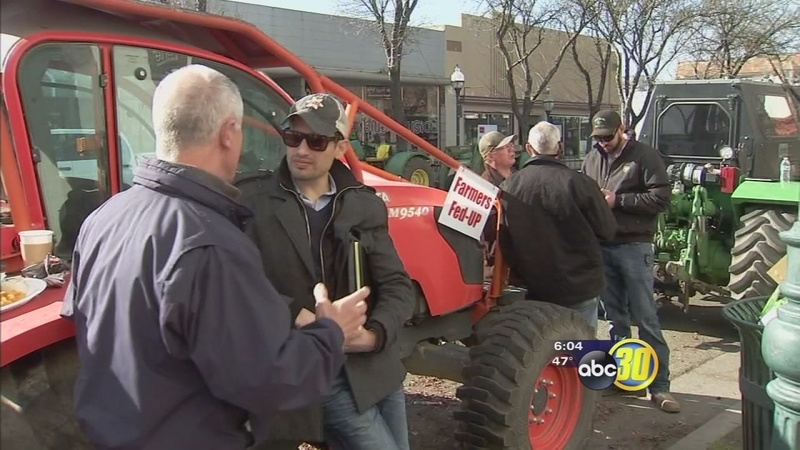 The plan is aimed at restoring a low salmon population. However, farmers fear this will mean less water for them and that it will ruin the Valley's economy.

One after another, fed up farmers parked their tractors outside the Merced Theatre, donning signs in protest of the state's Bay Delta Quality Control Plan.

Members of the state board were in Merced on Monday for a hearing on the proposed plan. The plan calls for increasing the amount of water flowing from the San Joaquin Valley into the Sacramento-San Joaquin Delta to help with the low salmon population

Baldoni, an almond farmer in Merced, says this plan will not only hurt farmers in the region but both the businesses and economy that strives on agriculture.

"If you take our water, you've taken everything," he said. "Taking our water is like taking out blood."

Inside, the theater was completely filled with concerned citizens. State and local leaders all spoke out against the plan and begged the board for a balance. State board members listened intently, trying to find a way to please both the fishing and agriculture industry.

"It's very challenging with very real impacts," explained Felicia Marcus, who is the chair of the State Water Resources Control Board. "And we're kind of in the middle asking for folks to help us find the right balance."

The Merced Irrigation District is proposing an alternative S.A.F.E Plan, aimed at supporting salmon, agriculture, along with local water quality and the environment.

"Let's do ecosystem restoration that makes sense," manager John Sweigard said. "Let's invest in the hatchery in the Merced River. Let's deal with predation. Everyone knows it's an issue. We're willing to put new targeted flows in the river at the same time."

Others at the meeting don't necessarily think 40 percent flow into the water system is unreasonable but do think the government should help local farmers in getting more water conserving equipment.

"A program that would give economic assistance such as a tax credit or tax incentive for the smaller farms or medium sized farmers to implement these technologies," Martin Kirkwood said.