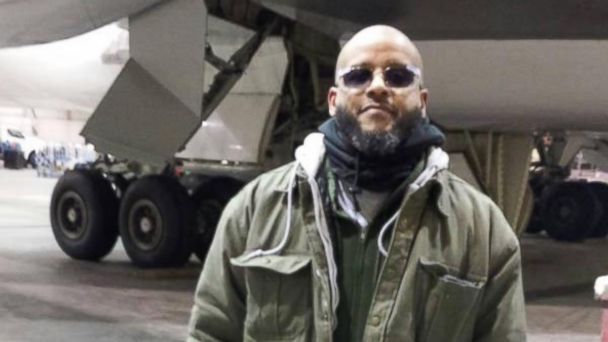 A former U.S. Air Force veteran has been arrested by the FBI for allegedly trying to join ISIS, the brutal terrorist group wreaking havoc in Syria and Iraq, after watching their online propaganda videos, authorities announced today.

Tairod Nathan Webster Pugh, 47, who is from New Jersey but had been living overseas for years, was secretly arrested two months ago after being deported back to the United States.

On Jan. 10, he flew from Egypt to Turkey hoping to slip into Syria and "fight violent jihad" with ISIS, but Turkish authorities refused to let him enter their country, federal prosecutors say in court documents filed in Brooklyn, N.Y., authorities said.

Egyptian authorities then deported Pugh to the United States, where he was arrested by the FBI and found to be carrying multiple electronic devices, including a cell phone that allegedly contained a photograph of a machine gun. Some of the data on the electronic devices had been deleted, prosecutors say.

On his laptop, FBI agents discovered that he had been viewing ISIS propaganda online and conducting online searches for such phrases as "borders controlled by Islamic state," "kobani border crossing," and "who controls kobani," according to prosecutors.

Pugh also allegedly searched online for the ISIS video "Flames of War," a 55-minute piece of propaganda that even the FBI highlighted late last year when asking "for the public's help identifying individuals who have traveled-or are planning to travel-overseas to engage in combat alongside terrorist organizations."

A month before his alleged attempt to join ISIS, Pugh was fired from his job as an airplane mechanic in Kuwait, according to court documents. He learned how to install and maintain aircraft engines, navigation systems and weapons systems while serving in the Air Force from 1986 to 1990, the documents say.

According to court documents, he "appears to have close ties to a woman in Egypt whom he has identified as his wife."

A federal grand jury in Brooklyn, N.Y. indicted Pugh Monday on two charges -- attempting to provide material support to terror organization, and obstruction and attempted obstruction of an official proceeding.

Over the past 18 months, about 30 people have been charged with joining terrorist groups in Syria and Iraq or trying to do so.

Pugh converted to Islam after moving to San Antonio, Texas, in 1998 and "became increasingly radical in his beliefs," the feds said.

In 2001, while he was working as a mechanic for American Airlines, a coworker notified the FBI that Pugh had been expressing anti-American sentiment and that he sympathized with Osama bin Laden, authorities said.

Pugh will be arraigned before a federal judge on Wednesday. If convicted at trial, Pugh faces a maximum sentence of 35 years in prison.