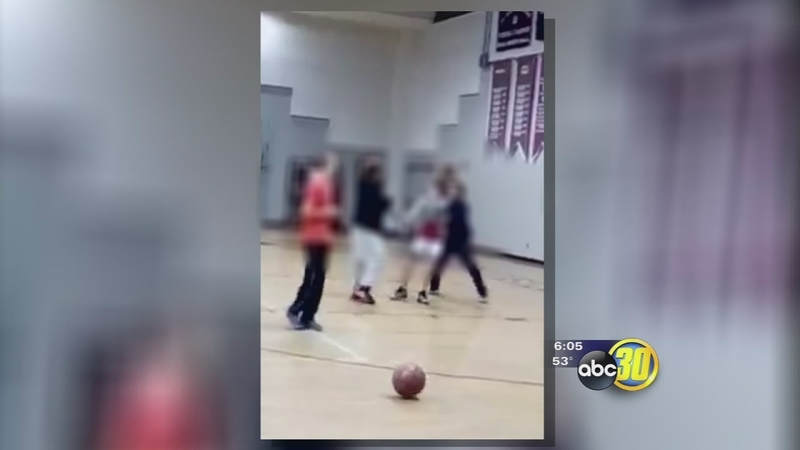 FRESNO, Calif. (KFSN) -- A fight on the Fresno Christian campus is shining a spotlight on the issue of bullying.

A couple vicious slaps are the first blows caught on video inside the school during what the kids said was an open gym at the school none of them attend. It wasn't exactly a fair fight.

"I tried to get away and the bigger one grabbed me and the other one just hit me a lot," said the 14-year-old bullying victim Bryce Barker.

The two other kids are about the same age as Bryce, but they're both much bigger than he is. And even after he broke free, the bullying didn't end.

"He was still trying to start stuff with me outside, like throwing punches everywhere," Bryce said. "He picked me up over his head, slammed me down."

Out came the phones again, and you'll see a few kicks landing on Bryce. When he finally got home, he had scratches on his face, scraped elbows, and a contusion on his knee. His brother had a fat lip from getting hit when he tried to help.

Bryce says he doesn't know why he was targeted, but his mom says she'd broken up another fight involving the same kid a couple months ago. She's the one who tracked down the video -- and posted it to Facebook, where it's been shared almost 2000 times -- even though she originally didn't even want to see it.

"I felt like that was going to be my only shot at justice, I guess," Ramona Barker said. "(It's) just really disturbing."

Action News talked to the other boy's mother as well. She says her son has struggled to deal with his father's death five years ago and his emotional development has been difficult.

"The culture teens have surrounding them right now is deeply dysfunctional and boys of color especially don't really have the support systems they need, so acting out will manifest itself in different ways," the mother, who we're not identifying, said. "But it is acting out and it will be addressed and it won't define who he is."

Fresno police say they intend to address it by arresting the boy for assault. But Bryce says he might be able to handle it himself if it happens again.

"I'm enrolled in Halo jiu jitsu and hopefully it doesn't get to that point where I have to fight him or anything," he said.

Both mothers tell us they hope the final outcome is consequences leading to emotional growth.

Here are a few online resources for dealing with bullying from both sides, including one from the government suggesting that consequences involving learning or building empathy can help prevent future bullying.