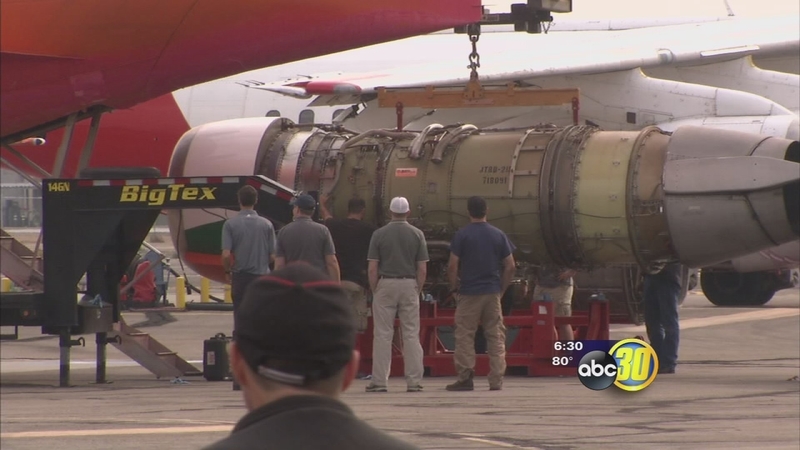 FRESNO, Calif. (KFSN) -- One engine of a twin-engine MD-87 firefighting jet exploded shortly after taking off from Fresno Yosemite International Airport on Sunday. On Monday, aviation mechanics at the Fresno Air Attack Base were putting a new engine on the converted passenger jet, hoping to get it back into service soon.

The Deputy Chief of the base, Van Arroyo, explained what happened. "The pilots noticed that there was a loud bang coming from the rear of the aircraft, immediately identified the fact that there was an issue with the motor, they instituted emergency procedures," he said.

The plane was flying right over Jeanette Sanders' neighborhood when the engine blew up. She told Action News, "It was like a big old boom that went off and it shook the house."

The plane landed safely. Remarkably, the only damage was to Sanders' car window. It was busted by shrapnel-like engine pieces that showered the neighborhood. "I was glad nobody was hurt, and the kids that were across the street they weren't hurt," said Sanders.

The plane is one of a fleet of privately-owned firefighting aircraft stationed at the Fresno Air Attack Base under contract with the Forest Service to battle the Rough Fire and other forest fires throughout the region.

"This season we have pumped 1.8 gallons of retardant out of the Fresno air tanker base supporting fires all over the West Coast," said Arroyo.

The plane in question is a converted passenger jet, an MD 87. This model has a good safety record, but over the years there have been several incidents of engine explosions. In one case in Florida, shrapnel from an exploding engine penetrated the plane and killed two passengers.

This plane is expected to be back in the air in the next day or two. The Federal Aviation Administration will investigate why the engine blew.