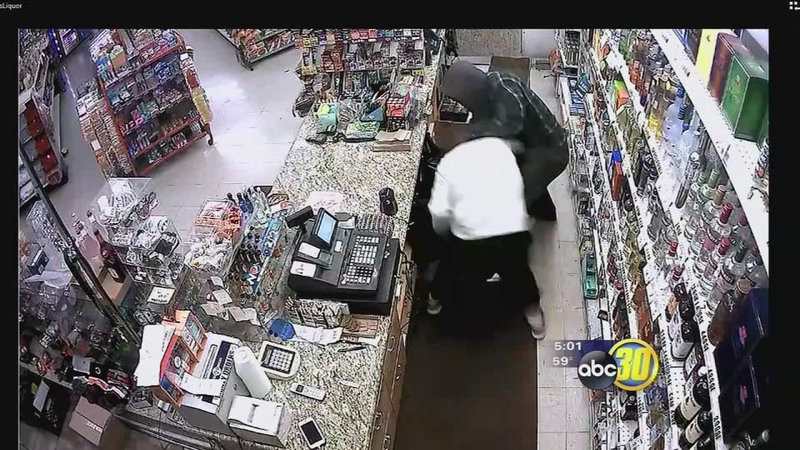 FRESNO, Calif. (KFSN) -- A store clerk was shot twice Sunday night during a robbery at a Fresno convenience store. The shooting happened at the Shop and Gas at Shields and Blythe Avenues and it's just the latest in a string of armed robberies.

The owner of the store said the holdup was the first robbery in the 17 years he's owned the place. The clerk, a 47-year-old man with a wife and two kids was shot twice after two masked men entered the store. It's the latest, and most violent, robbery in the past week.

At least four shots were fired in the robbery. One went through the cash register and another shattered the screen on the lottery computer, and two shots hit the store clerk.

"Maybe the suspects got a little antsy, that they felt the clerk was taking too long to get the money out of the register and that's why they shot him," Tony Botti with the Fresno County Sheriff's Office said.

That shooting happened around 7 p.m. Sunday night. The store owners told Action news they reviewed surveillance video of the incident with deputies and say it took 23 seconds from the time the two robbers entered the store, shot the clerk and left.

But it appears they dropped the money and may not have gotten away with anything. Customers found the store clerk on the floor and called 911. He is in the hospital and is expected to recover. The store is in a county island and the Sheriff's Department is looking for the suspects.

This is just the latest armed robbery. Also on Sunday the Tower Smoke shop on Maroa was robbed by an armed couple, a white man and woman. They only got away with a small amount of cash and nobody was hurt.

On Friday, the MGA Liquor store was robbed by two men with guns and the two clerks were left handcuffed in the bathroom. Fresno Police have just released surveillance video of a robbery that occurred at Dan's Liquor at Marks and Ashlan Avenues last Wednesday. It shows the robber, armed with a knife attacking the clerk. The clerk attempts to fight back with a cane, but quickly gives up and lets the thief take the money. Police advise clerks not to fight back.

"We don't recommend you resist just give them what they want, it's not usually a lot of money anyway," Lt. Joe Gomez with the Fresno Police Department said.

Both police and the sheriff's department note robberies like this tend to pick up this time of year so thieves can do their Christmas shopping.

"Holiday season, we've got big Thanksgiving sales coming up," Gomez said. "Thieves are just like anybody else, a lot of time they want money in their pockets to buy these gifts."