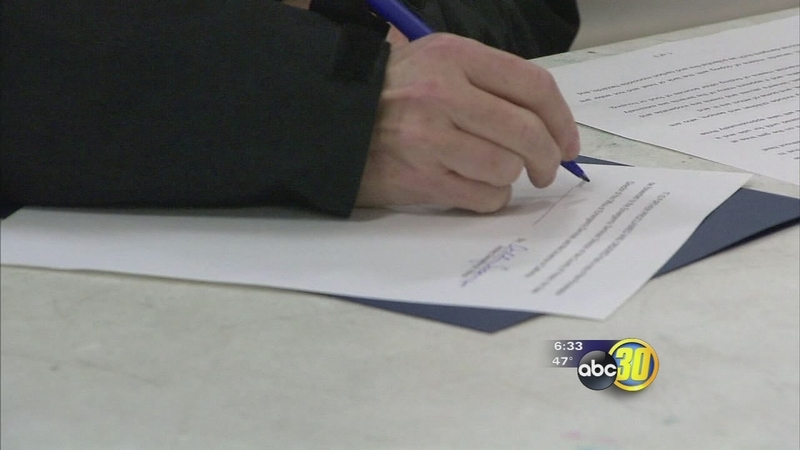 FRESNO, Calif. (KFSN) -- Fresno's mayor expressed outrage at the conditions at a Central Fresno apartment complex where between 1000 and 2000 residents have been without heat or hot water for nearly two weeks.

Fresno mayor Ashley Swearengin signed an emergency declaration Wednesday, clearing the way for the city to take control of the repairs needed at this 220 unit complex if the owner fails to begin work repairing the gas lines by next Tuesday. She also said she spoke with the out of town owner, Chris Henry. "I expressed to him on behalf of our entire community how deeply, deeply, angry we feel about conditions at the Summerset Apartments. Our residents deserve better than this, period. As outraged as I am about what has happened at Summerset I am equally as troubled knowing that there are thousands of substandard housing units in our city today," said Swearengin.

The mayor pledged to do more to deal with the city's substandard housing problems during the final 13 months of her administration. In the meantime, residents here are still dealing with the cold. Some residents have small electric space heaters, but the fire department is concerned they could create a hazard. "With the gas lines being as old as they were, and having the damage, and we want to make sure the electrical system, which is about the same age, doesn't have too much of a draw on it. So we are asking for the electric blankets to be used instead of space heaters," said Jeffrey Guynn, Fresno Fire Department.

Trailers with mobile kitchens are being set up by the Southern Baptist Conventions Disaster Response Unit. They plan to be up and running in time for Thanksgiving dinner. They have also brought in portable shower units.

The community has been responding as well. Granville homes is donating 300 electric blankets, PG&E has donated $25,000 to help the residents, and the property owner is also donating $25,000.