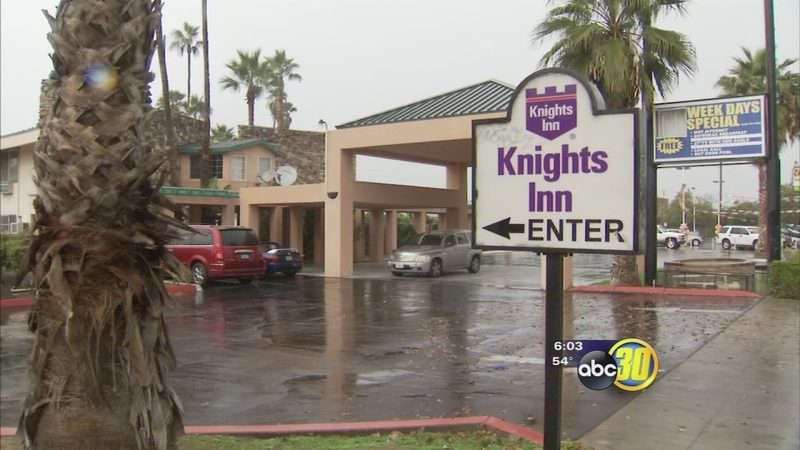 FRESNO, Calif. (KFSN) -- The owners of a Fresno motel could soon be facing fines because of the high volume of calls for service to Fresno police.

The Knights Inn on Blackstone Avenue has had 349 calls to 9-1-1 within the past six months.

Six months ago, Falguni Patel of Nebraska purchased the Knights Inn but since the day she arrived at the property, it's been a challenge. "It's not only us, it's the street, it's the neighborhood, it's the locality. Then you know, we aren't the law enforcement, we are not the cops. We need help from the government, that's why we pay the taxes," said Patel.

Policing sometimes unruly guests, intruders, and those described as disrespectful troublemakers has been a constant headache. Several weeks ago, surveillance cameras captured a man kicking in the office door. Top leaders at the Fresno Police Department said the hundreds of calls for service are draining their resources.

During recent stings, officers have also uncovered countless other problems at the motel. "Several other crimes appeared-- came to our attention as a result of the prostitution related arrests there. MAGEC got one for heroin sales related to the Knights Inn. 10851'S you name it," said Tom Laband, Fresno Police Department.

Officers said since October 1st they've had 154 calls for service at the Knights Inn. The calls are everything from suspicious activity to assaults, trespassing, and domestic disturbances. Many of the calls are from motel managers. That's why at check in Patel said guests must sign an additional waiver promising to obey all laws while they are renting a room-- If not, they can be forced to leave.