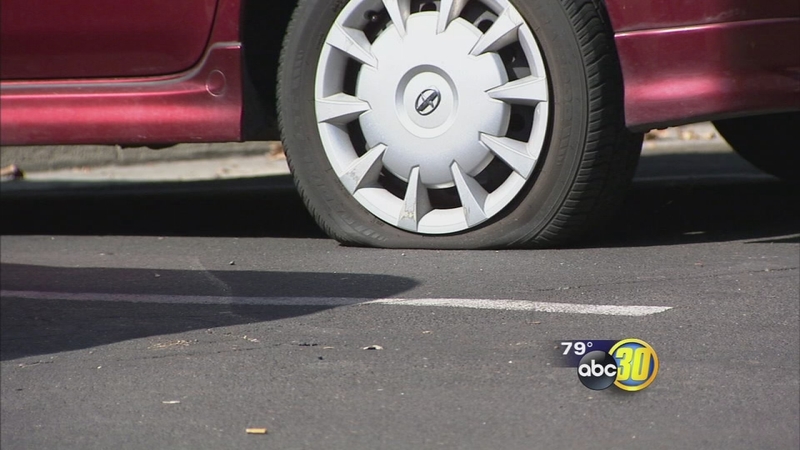 FRESNO, Calif. (KFSN) -- Dozens of people in Downtown Fresno say someone slashed their car tires overnight, and many believe broken street lights are partly to blame.

Hugo and Graciela Loaeca woke up Sunday morning to find their tires were flat and undrivable. Initially they blamed a stroke of bad luck for two flat tires, but that's when they noticed car after car in the row next to them had flat tires too.

"If you come in at the middle of the night and it's pitch black, you don't know what's going to happen," Hugo Loaeca said. "It's a big safety concern for us."

They're among the dozens of people who shared photos with Action News of their tires slashed on Saturday. So far, residents from three different city blocks say they've fallen victim to this crime.

"The tow truck driver said he's already gotten 30 calls in that area for cars that had been slashed, so somebody hit the entire neighborhood," said Kenneth McAvoy.

McAvoy lives a few streets down and had to get a tow Sunday morning. He and Hugo Loaeca say it's the city of Fresno who's at fault. They claim several downtown blocks have been without any lighting for months due to recent copper wire theft.

"Every time I call the city, they're not willing to do anything about it. They tell me that they're working on the problem," said McAvoy.

"They're trying to get city planning to take care of it but they're not doing it, and we've been calling and calling," said Loaeca.

City Manager Bruce Rudd confirms there's been a rash of copper wire theft in the city center but says he hasn't been made aware of any concerns from Fresno citizens who live in the Mural District.

"I haven't received any calls or been made aware of personally of any problems in that area, but again we'll have a crew out there first thing tomorrow," said Rudd.

The Fresno Police Department posted on social media four days ago that there's been an increase in vehicle burglaries in surrounding downtown neighborhoods.