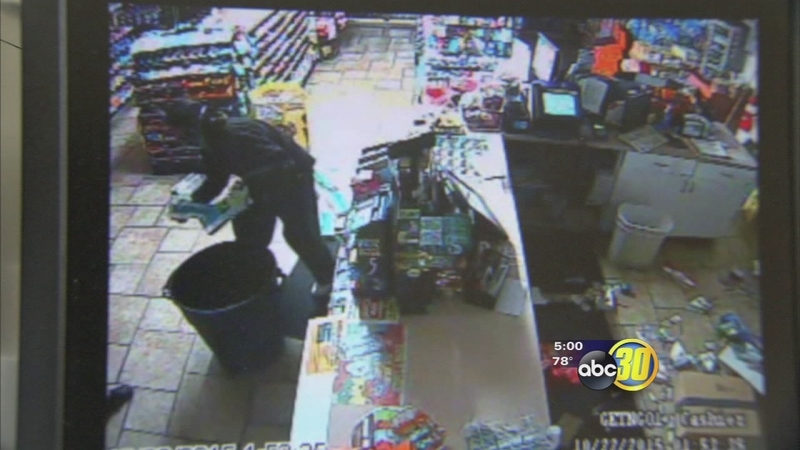 Officers say the suspects are hitting up liquor stores and stealing thousands of dollars in tobacco products. The latest burglary took place at a mini mart at Peach and Tulare in Southeast Fresno.

At this point, police believe the suspects are the same in all three crimes. They are using big trash cans to collect cigarettes, cigars and chewing tobacco.

The thieves were hard at work around 3 a.m. last Thursday armed with industrial sized bolt cutters and a crowbar. Once they got into the Get-N-Go Mini Mart it's a race to fill these 33 gallon trash cans as quick as possible.

Weeks earlier it was the same scenario not far away at the Quick Pick Mini Mart at Peach and Olive. The owner, Parminder Singh, says the thieves cleared out his cigarette counter stealing about $8,000 in tobacco products. "They were not picky at all. If they were picky, I mean they are not going to sit over here and pick the stuff, they just grabbed it."

Fresno police detectives have noticed a pattern in Southeast Fresno that's becoming more frequent. MGA Liquor on Kings Canyon near Armstrong was also hit. "It's the same M.O. we're seeing they're going into these places. They already have crowbars or they've probably already scouted it out to know what to bring to break in," said Mark Hudson of the Fresno Police Department.

Investigators say the thieves never touch the traceable lottery tickets near the cigarettes. They are specifically after the light weight, profitable products that are easy to get rid of. "They can certainly sell them to other stores. They can sell them at swap meets, they can put them on social media or on websites where they can sell them or they can just personally sell them out of their home," said Hudson.

Officers have not been able to identify the suspects or any vehicle they may be using. These thieves are moving quick, even with the alarm blaring. It takes the suspect only about 30 seconds to get in and out.

Damages the suspects are leaving behind is in the thousands.

A reward is offered for information that leads to their identity and arrest.
Related topics:
fresno southeasttheftcrimerobberyfresnofresno police departmentcrimetracker
Copyright © 2021 KFSN-TV. All Rights Reserved.
FRESNO