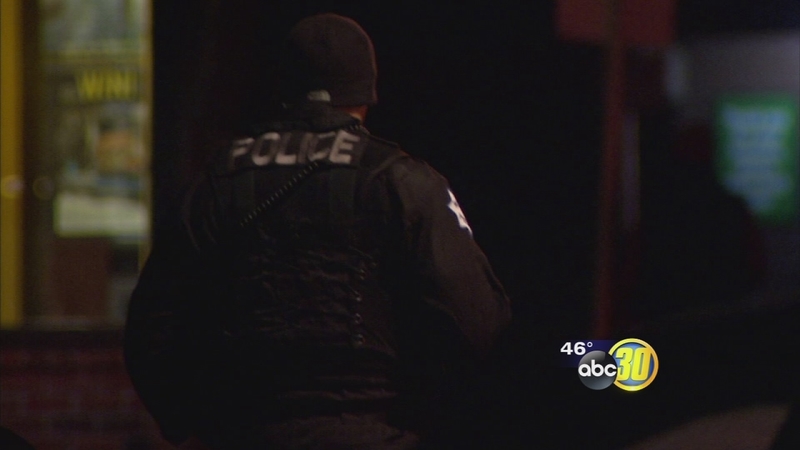 FRESNO, Calif. (KFSN) -- After a surge in violence over the past week, including two shootings at officers, police are now focusing on stopping more trouble caused by gangs in west Fresno.

It has Chief Jerry Dyer committed to going after them where they live, work, and play. Many residents, though sometimes scared, choose not to leave.

"Sometimes I'm not comfortable but you know I still gotta live my life," said one Southwest Fresno resident, who did not want to be identified by name. Drive-bys, innocent people getting shot, get killed, mistaken identity. So you know it's pretty rough over here."

"We have had an influx in the last few weeks of black gang activity in the city," said Fresno Police Sgt. Chris Desmond.

Desmond says they've made an impact because some gangs have started to disperse.

But many still congregate at public places like a small shopping center at the corner of Martin Luther King Jr. Boulevard and California Avenue.

Shootings have become a common occurrence there.

Desmond says large groups use a memorial for a dead gang member as an excuse to loiter. But police hang out there too, and that's been effective so far. "It's been a better result for us than starting physical confrontations, it makes the center a little bit more peaceful, and then while we're here we get people back in to patronize the businesses," Desmond said.

Another location Desmond and his officers will saturate is a gas station on B and Fresno Streets. Officers say it's notorious for large gang-member gatherings which have led to shootings inside and outside the store. "We start looking for cars that we recognize, people that we recognize, those that we think may be more prone to be armed," Desmond said.

After a violent week, officers are relying on enforcement measures designed to disrupt further bloodshed, in a part of Fresno that sees so much of it, but will not give up trying to stop it.

"We as human beings we just really need to put the guns down and stick together, get this community back right. It's never too late to change," said the southwest Fresno resident.