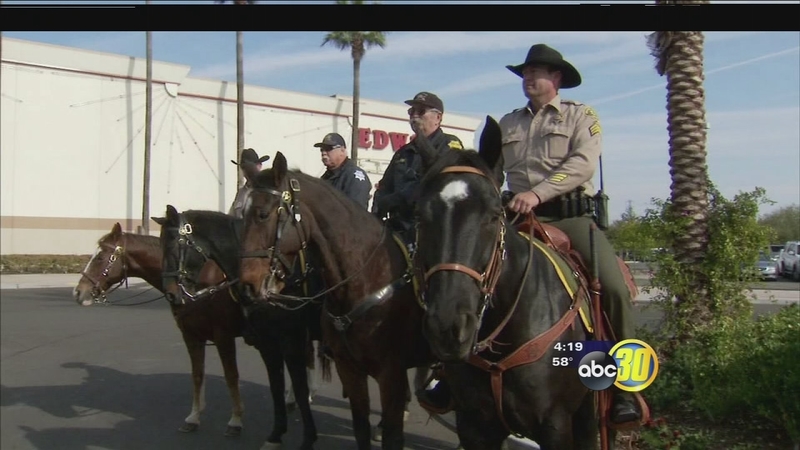 FRESNO, Calif. (KFSN) -- It's the first official day of holiday shopping and only one month till Christmas. Now, officers are out patrolling non-stop in what they call Operation Christmas Presence, letting thieves know crimes will not be tolerated.

Tis the season for giving and tis the season for thieving for some. While you are out shopping for that perfect holiday gift, someone could be shopping inside your car for theirs. That's why law enforcement agencies like Fresno Police, the California Highway Patrol and the Fresno County Sheriff's Office are combating Christmas bandits with extra patrols during the holiday.

"For the purpose of increasing the feeling of safety," Fresno Police Chief Jerry Dyer explained.

Officer Ed Slaton is part of the operation's mounted patrol team at River Park. He was out during Black Friday, which is one of the biggest days for crimes of opportunity.

"We're out here looking for people that are walking around looking into cars and that kind of stuff to help eliminate the vehicle burglaries," Slaton explained.

Slaton said there are things you can do to stop thieves from stealing from you. One suggestion is parking in well-lit areas and if you have to put something in your car don't leave it in plain sight.

"Make sure that you cover them up hide them put them in the trunk or something because if they're visible they're going to break into your car," he said.

The shoppers out cashing in on deals the day after Thanksgiving were happy to see the large police presence.

"We've been out shopping saw seven or eight horses with sheriff's (deputies) on," shopper Herlen Tautolo said. "They're going around and it's cool."

And some are even happier knowing in addition to police, River Park officials are doing what they can to increase the sense of security with an eye from above in giant crane.