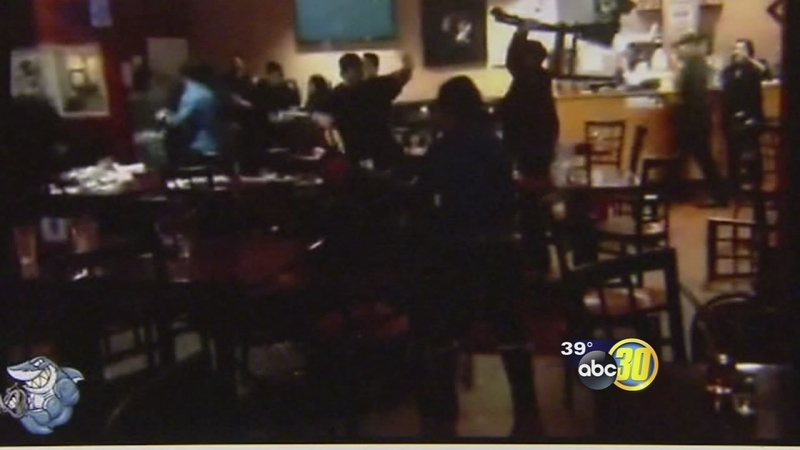 FRESNO, Calif. (KFSN) -- Fists and chairs flew at a sushi bar in Southeast Fresno Friday. The huge brawl at YOLO Sushi was all caught on camera and the owners are left picking up the pieces.

As its name implies, YOLO Sushi Bar is a place you come to let loose and sing a few tunes. Celebrities like Justin Bieber have graced the karaoke stage with their presence. But, last Friday, another high-powered crowd passed through.

"Some of those young kids, I don't know what they are thinking," owner Janet Phimmachack said. "I just have no idea."

Phimmachack and her husband Pon were there as the chaos unfolded. They say a crowd of youngsters had been acting rude all evening and decided to end the night by provoking another table.

"It happened so fast," Pon said. "The guy was actually sitting right here when the other kid approached him and he just asked him, 'Do I know you?'"

And then somebody threw a punch. Cell phone video caught the mayhem that followed as people flung chairs, smashed tables, and threw beer glasses across the room. The seven-minute melee tore apart the Phimmachack's restaurant and then their hearts.

"It seems like they just wanted to vandalize our property and that's what made me mad," Janet said.

Pon believes the troublemakers were from Merced, he told his employees not to engage for their safety. But as more people got involved, threatening his wife's safety,

he stepped in before police arrived.

"Those types of guys will ruin it for everyone else," he said. "What we put our heart and soul into building, hopefully, they'll think about it before they ruin somebody else's business or lives."

The Phimmachacks have been open for less than two years and primarily hire and train students. On Friday, they say they weren't treated with the same kindness.

"We just have to learn how can we prevent it from last time," Pon said. "So, we're going to study the videos and see how these things got out of hand."