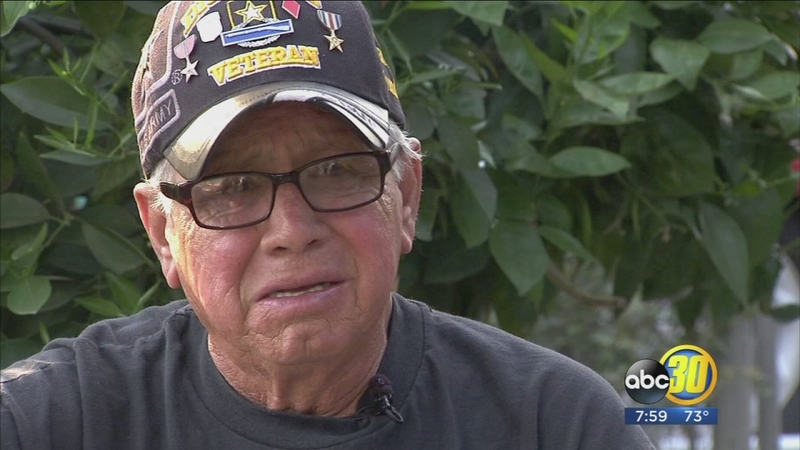 FRESNO, Calif. (KFSN) -- For Vietnam vet Federico Rendon, luck hasn't been on his side.

One year ago, a trip to the grocery store on his bike started turning the wheels of misfortune.

"I went to the store to cash a lottery ticket that I bought," he said.

The visit was his first taste of bad luck. As he was leaving, a man attacked him and took off with his only mode of transportation.

"I tried to chase him, but he was long gone and then I said, 'Oh my God, that is the bike my daughter gave me.'"

Fredrico, known to his friends as Big Fred, went back the next day hoping surveillance cameras caught the thief.

"The guy was like, 'No, we don't have cameras out on the front,'" he recalled.

But as he turned to leave, a child outside was waiting for him with a message.

"He goes, 'Sir, what my dad wants to see you,'" he recalled. "I said, 'Who is your dad?' He said they live across the street and he wanted to see him."

The boy's father walks out with a three-wheel bike for the 69-year old to take home.

"He goes, 'No, you take this,'" Rendon said. "It was like something from Jesus, God and he gave me the three-wheeler."

That three-wheel bike though was stolen out of Big Fred's yard two days ago.

"I loved that bike because it was the only thinking I could go buy groceries with," he said.

So, when we asked how hard it has been without his only mode of transportation, Big Fred looked down visibly hurt and heartbroken. Yet, clinging to faith, he hopes the thief will find it in their heart to return what meant so much to him.