Friends use bows to honor girl killed in Fresno crash 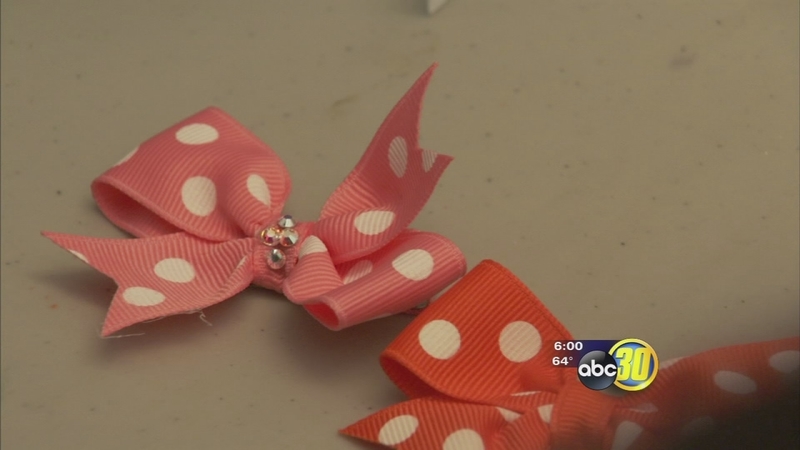 Friends use bows to honor girl killed in Fresno crash

FRESNO, Calif. (KFSN) -- The 31-year-old driver accused of causing a fiery crash that killed a mother and her daughter is now charged with two counts of gross vehicular manslaughter.

He's recovering in the hospital while friends of the victims are supporting the family. Jacqueline Rivera, 40, and Aaliyah Chavez, 11, died in that collision.

She wore bows almost every day, which is why those who knew her best decided to have a bow-making party, making enough for her entire to school to be outfitted just like she would be.

You wouldn't think it would be difficult to tie a bow, superglue it and attach a pin. But for one group, every knot is felt internally.

"She would try to match her bow with her outfit to make it stand out," Aaliyah's best friend Yasmin Acevedo said.

Yasmin says those bows were a signature, a staple of Aaliyah's every outfit. The two were inseparable, climbing trees, posing just for fun, and always texting, until Saturday when Yasmin wondered why Aaliyah stopped responding.

"I didn't want to believe it until I saw it, and it really broke my heart because she's my best friend and it really affected me," Yasmin said.

Aaliyah and her family were on their way home from a quinceanera on Saturday night. Police say they were stopped at a red light when a car driven by Rafael Pedroza slammed into them. The family SUV burst into flames. Aaliyah and her mother did not survive.

Michelle Parker says the accident is incomprehensible for Aaliyah's young friends -- most of whom attend the nonprofit afterschool group known as Care Fresno.

"I'm here, I listen, I'm just that person they can go to, and if they have questions I try to answer them," resource coordinator Michelle Parker said.

Parker kept an old Christmas card from Aaliyah, who's described as a responsible, kind-hearted and bright young girl who had dreams of working in the medical field. Yasmin says the two were supposed to fulfill those dreams together -- a future that Yasmin says she'll now carry out and with a matching bow.

"I will always have the memory she planted inside me," Yasmin said.

Those bows will go to every student at Ayer Elementary School on Monday in the hopes that everyone will remember Aaliyah that day and every day.

And also on Monday, the suspect will face a judge.