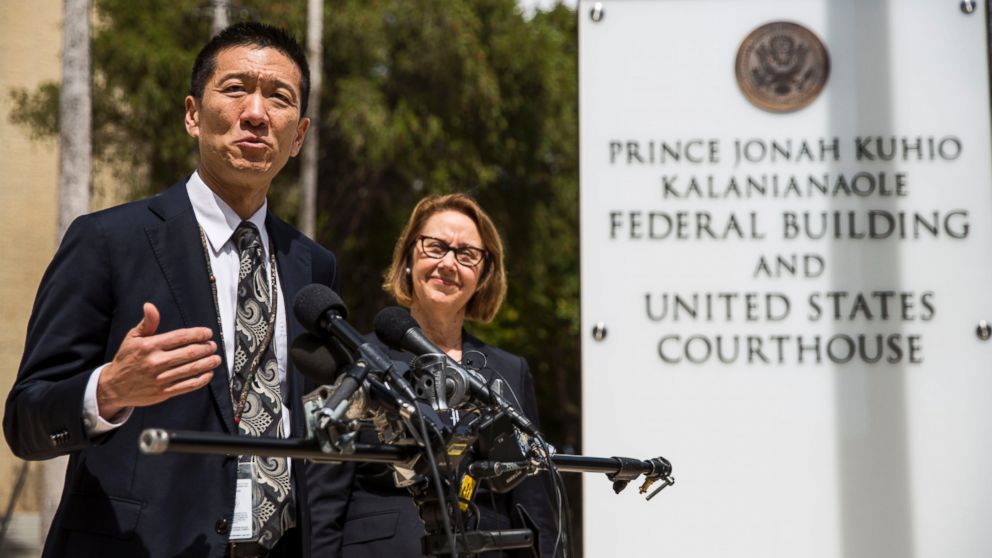 In the more sweeping outcome, U.S. District Judge Derrick Watson on Wednesday issued a nationwide temporary restraining order on the ban soon after hearing arguments in a Hawaii federal court, finding that there was "significant and unrebutted evidence of religious animus driving the promulgation" of the new executive order and its predecessor.

His ruling prevents core provisions of the executive order, affecting refugees and citizens of six predominantly Muslim countries, that were scheduled to go into effect today.

At a rally in Nashville Wednesday night, President Trump slammed the decision as "an unprecedented judicial overreach."

In arguing for the restraining order, the state of Hawaii alleged that the new executive order "began life as a Muslim ban," and that the statements of President Trump and his advisers "provide direct evidence of the Executive Order's discriminatory motivations."

"The March 6, 2017 Executive Order was motivated by animus and a desire to discriminate on the basis of religion and/or national origin, nationality, or alienage," the state contended.

Nihad Awad, the national executive director of the Council on American-Islamic Relations, said in a statement, "We welcome this order as confirmation of the strength of our nation's system of checks and balances that prevents one branch of government from violating the Constitution or the rights of any vulnerable group. We urge the Trump administration to scrap this Muslim ban entirely because it disrespects both the Constitution and America's longstanding tradition of religious freedom and inclusion."

Wednesday's ruling drew a mixed reaction from other legal experts.

Peter Margulies, an expert in national security law at the Roger Williams University School of Law, disputed the judge's reasoning.

In part, Margulies said, Watson's opinion "confuses campaign speeches with the proof of intent that the Supreme Court has required." He added that "the initial executive order had due process problems and the government has dealt with those problems."

But others praised Wednesday's ruling.

Hiroshi Motomura, a professor of immigration and citizenship law at the UCLA School of Law, said that the new order still runs afoul of the 1st Amendment's Establishment Clause, which prevents the government from discriminating against a particular religion.

"Since the case law is clear that a law can violate the Establishment Clause based on its intent and origins even if the law doesn't expressly name a religion as favored or disfavored, it makes eminent sense that the new ban is just as vulnerable to the Establishment Clause challenge as the Jan. 27 version was," said Motomura. "The intent and origins haven't changed."

"The legal standard is whether there is religious based motivation. There's so much evidence of this," Kalhan said. "The court would have to be an ostrich to deny that the new order emerged from the same context as the first one."

The state of Hawaii also argued the ban would harm its tourism industry, as well as its ability to recruit foreign students and workers.

The Trump administration had argued that the plaintiffs were trying "to impugn the order using campaign statements" and that the court should not look beyond the stated purpose of the revised order, which had been substantially revised to exempt legal residents and current visa holders.

The administration asserted that statements made during the campaign by Trump and his surrogates were "irrelevant" and urged the judge not to look for "secret motives" of government officials in reaching his decision.

Judge Watson, who was appointed to the bench by President Obama in 2012, issued a thorough rebuke of the administration's position.

"The remarkable facts at issue here require no such impermissible inquiry," Watson writes, referencing then-candidate Trump's call for "a complete shutdown" of Muslim immigration and recent comments by Trump senior adviser Stephen Miller that the new order would result in "the same basic policy outcome for the country" as the first, now revoked, order.

Watson's order capped off a whirlwind day of court hearings around the country, with plaintiffs in Maryland and Washington State also seeking to block the ban before it goes into effect.

The attorney general of Washington State, Bob Ferguson, whose lawsuit resulted in the injunction preventing implementation of the first version of the travel ban, on Wednesday night praised the Hawaii order as "fantastic news."

"Today's rapidly evolving events show the strength of our growing coalition, from the eastern seaboard to the Hawaiian islands," Ferguson wrote on Twitter.

Meanwhile, a federal judge in Maryland on Thursday morning issued a nationwide preliminary injunction on one part of Trump's revised ban -- the section that imposes the 90-day pause on issuance of visas to citizens of the six aforementioned countries. Like the federal judge in Hawaii, U.S. District Judge Theodore Chuang Maryland ruled that the plaintiffs had standing and a likelihood of success on the merits of their claims, including claims that the executive order discriminated on the basis of religion.

Unlike the nationwide temporary restraining order issued by the Hawaii judge, however, this nationwide preliminary injunction will remain in place indefinitely until it is either lifted by the Maryland judge or overturned by a higher court.

"The Maryland district court has issued yet another strong judicial condemnation of President Trump's unconstitutional Muslim ban," said Omar Jadwat, director of the American Civil Liberties Union's Immigrants' Rights Project, who argued the case. "If, as promised, he continues to try to defend this indefensible order in the courts - or goes back to the first iteration of the ban - he will just keep losing."