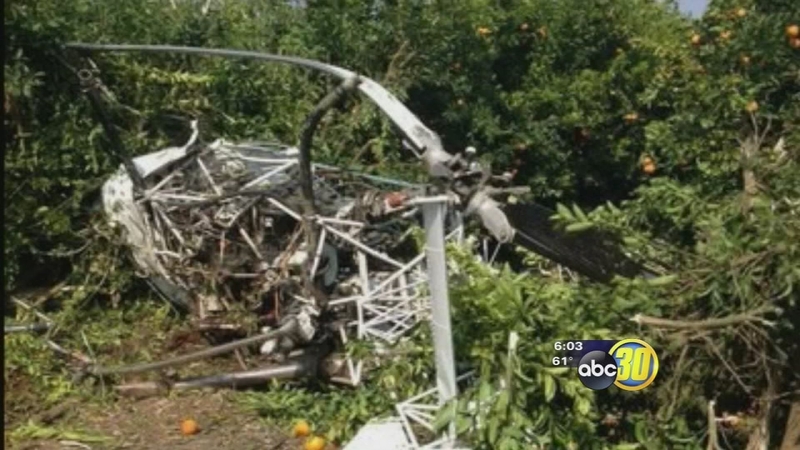 TULARE COUNTY, Calif. (KFSN) -- A helicopter crashed in the middle of an orange orchard Friday morning in Tulare County. The accident happened near Road 172 and Avenue 376; that's just north of Ivanhoe.

Emergency responders were called to the orchard after the helicopter crashed in the middle of it right before 9:30 a.m. Jeff McLaughlin with Tulare County Fire says the pilot was alert and talking to responders. He told them he had hit a power line while spraying insecticide over the orchard.

"A passerby said that it looked like the aircraft, according to the passerby, tried to go below the power line," said McLaughlin.

Air ambulance taking off with pilot injured in helicopter crash near Woodlake.@ABC30 pic.twitter.com/hoo31dQ1bZ

An air ambulance was called because of the remote location. Tulare County Fire says the pilot suffered injuries to his legs. He's expected to be OK. Still, he was taken quickly to a local hospital.

"From the time we arrived to the patient being flown out was approximately 33 minutes," said McLaughlin.

Pictures taken by Tulare County Fire show the mangled mess the helicopter was left in. However, the pilot wasn't trapped inside.

"He was assisted from the helicopter by our crews. We did not have to extricate," said McLaughlin.

The chopper was carrying an insecticide called Mustang. Some leaked during the crash, but no fuel leaked. Crews were quickly on scene to repair the downed power line.

The Federal Aviation Administration and National Transportation Safety Board are investigating this crash. Environmental Health was also notified because of the insecticide that leaked.

Helicopter down in orange grove near Woodlake. @ABC30 #mapit pic.twitter.com/NCN7u9HZKY