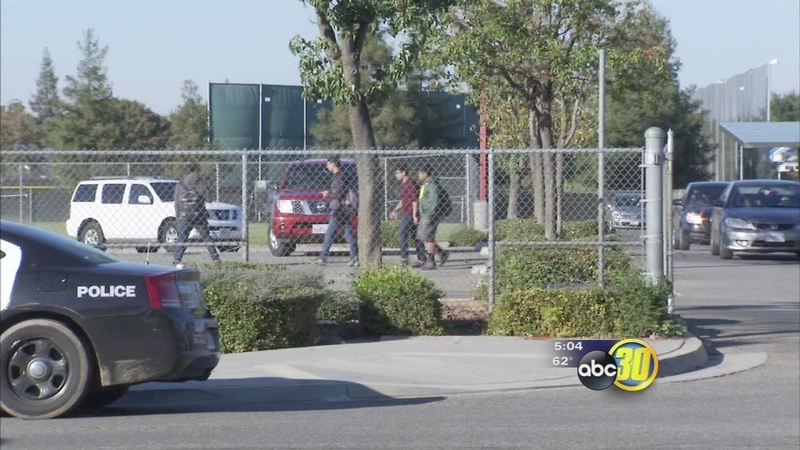 FRESNO, Calif. (KFSN) -- Friday was the second day in a row that a high school student was a victim of an armed robbery. Fresno police believe the most recent victim was targeted.

Authorities said a senior at Central High's east campus had just returned from lunch and was parking his car in a student parking lot when he was held at gunpoint. Authorities believe the student was targeted because he was robbed as soon as he got out of his car.

"The suspect just pops out, has a gun, orders the victim to give him -- the victim had a gold chain on -- took the gold chain, ripped off a gold bracelet from the victim's wrist causing a little bit of an injury, he had a laceration on his wrist," said Lt. Joe Gomez, Fresno Police Department.

Police say the suspect then took off and jumped one of the parking lot's fences and into the neighborhood just south of the school. Officers don't believe the crime is related to yesterday's incident where two Hoover High School students were robbed at gunpoint as they were walking to school. Those suspects were arrested. "I talked to the school resource officer that works this school and he says they've had nothing like this for years at this school," Lt. Gomez explained.

The crime forced Central High East to go into lockdown for roughly 20-minutes. "Very alarming. It's something we obviously take, the safety of our students and staff, very seriously and that's one of the reasons we work so closely with the police department here in Fresno," said Mark Sutton, Superintendent of Central Unified School District.

Authorities are still looking for the suspect. They believe he's between 18 and 20-years-old. He was wearing a black hooded sweatshirt with black sweatpants that had a red stripe on the side. They believe he's about 5'7", medium build and was wearing a mask on his face during the crime.
Related topics:
fresno centralhigh schoolfresnoarmed robbery
Copyright © 2021 KFSN-TV. All Rights Reserved.
FRESNO