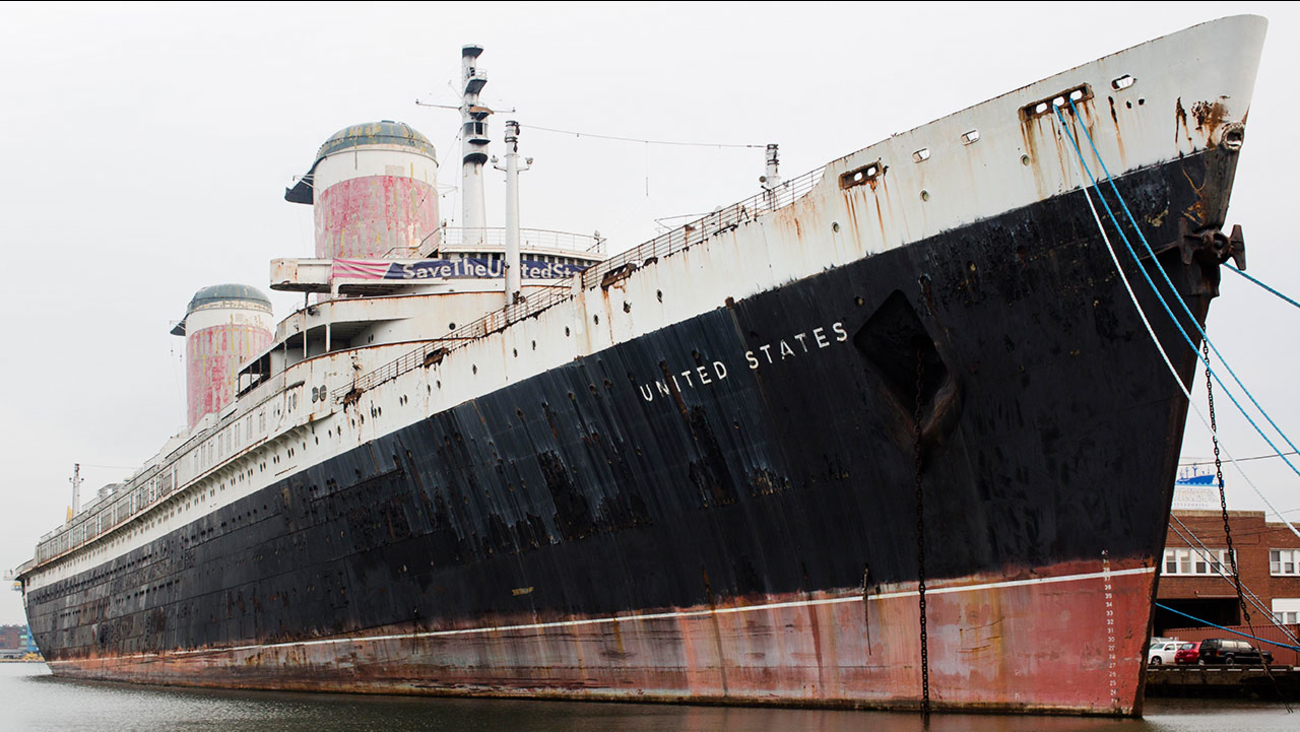 In this Nov. 22, 2013, file photo, the SS United States sits moored in Philadelphia.

PHILADELPHIA -- Even as stewards of a historic cruise ship that carried princes and presidents frantically pursue deals to preserve the vessel, they fear rescue efforts will sink without a large infusion of cash by month's end.

The SS United States has issued many mayday calls over the past few years, but its overseers recently retained a broker to explore selling the defunct luxury liner for scrap.

"She's faced peril before, but this feels different," said Susan Gibbs, executive director of the SS United States Conservancy. "And what is so excruciating about it is that we have made so much progress during the past year on redevelopment."

The upshot, said Gibbs, is that the group has never been closer to saving the ship - but also never closer to losing it.

The conservancy announced last year that it was chasing redevelopment options that could bring the ship back to its home port of New York as a stationary, mixed-use attraction likely featuring retail, restaurants, offices and/or hotel space.

But as complicated negotiations continue for competing sites in Brooklyn and Manhattan, Gibbs said unsustainable costs are mounting in Philadelphia, where the conservancy spends $60,000 monthly to maintain the rusting ship on the Delaware River. The group set a fundraising deadline of Oct. 31.

The United States, which was designed by Gibbs' grandfather, holds the record for the fastest trans-Atlantic crossing. It became obsolete as air travel increased, yet by the time "Big U" was taken out of service in 1969, it had hosted U.S. presidents, European royalty and countless movie stars.

Gibbs estimated the cost of overhauling the now-gutted boat at more than $300 million. But she said the figure must be put in context: The vessel, which is nearly five blocks long, boasts more than 500,000 square feet of usable space. Stood on end, it would be almost as tall as the Chrysler Building.

"It's basically a horizontal skyscraper that would be prime waterfront real estate," she said. "We think it's exciting and feasible, and it could be such a marquee address. ... There is nothing out there like it."

John Quadrozzi Jr., president of the Gowanus Bay Terminal in Brooklyn, would love to incorporate the vessel into the waterfront community there, describing it as the ultimate out-of-the-box development opportunity.

He said he's been meeting with elected officials and potential investors to drum up support.

"We want to work with the ship and bring it back to life," Quadrozzi said.

Keith Harper, a vice president at the Virginia-based maritime firm Gibbs & Cox, confirmed the company was hired by a developer to sketch out possibilities for the ship's reuse. (Gibbs is not associated with the firm, though it was founded by her grandfather.)

Harper couldn't discuss specifics because of a non-disclosure agreement, but he noted the project presents unusual hurdles.

Over its career, the United States carried more than 1 million passengers. Many still have a soft spot for the vessel, as evidenced by comments on its Facebook page. Yet even some fans say the years of SOS calls have grown tiresome, and that perhaps it's time to send the ship to a watery grave as an artificial reef.

That would break the heart of Paul Stipkovich, who heads a New York-based group of supporters. He calls the vessel "a true American icon."

"She might look romantic in this kind of sorry state, a big grand lady who time has somewhat forgotten ... but she's got good bones," Stipkovich said. "Send her to hair and makeup, I'm sure she'll come back beautiful."

A fundraiser planned at Philadelphia's tony Union League on Oct. 29 aims to re-create an evening on the elegant ship. The conservancy's board likely will meet the following week for a final assessment of its financial position, said spokesman Tom Basile.