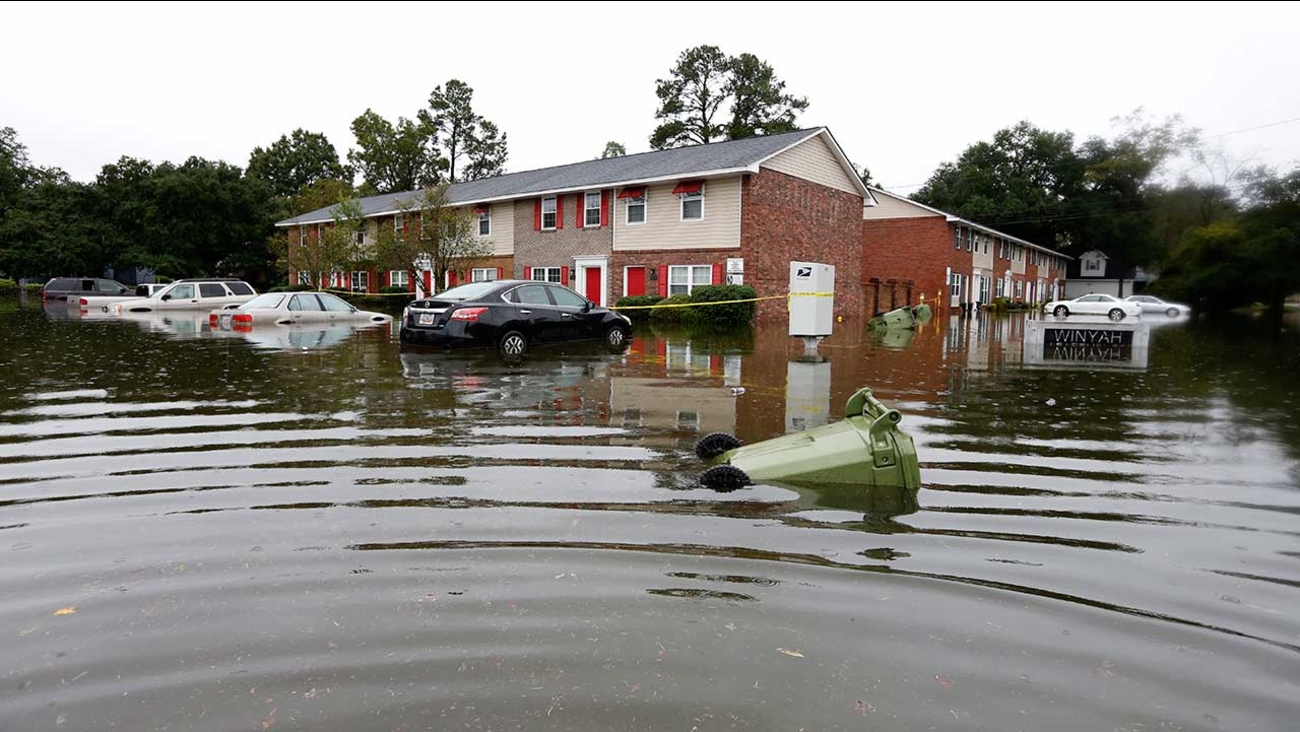 Hundreds were rescued from fast-moving floodwaters Sunday in South Carolina as days of driving rain hit a dangerous crescendo that buckled buildings and roads.

COLUMBIA, S.C. -- Hundreds were rescued from fast-moving floodwaters Sunday in South Carolina as days of driving rain hit a dangerous crescendo that buckled buildings and roads, closed a major East Coast interstate route and threatened the drinking water supply for the capital city.

The powerful rainstorm dumped more than a foot of rain overnight on Columbia, swamping hundreds of businesses and homes. Emergency workers waded into waist-deep water to help people trapped in cars, dozens of boats fanned out to rescue people in flooded neighborhoods and some were plucked from rooftops by helicopters.

Officials said it could take weeks or even months to assess every road and bridge that's been closed around the state. Several interstates around Columbia were closed, and so was a 75-mile stretch of Interstate 95 that is a key route connecting Miami to Washington, D.C. and New York.

"This is different than a hurricane because it is water, it is slow moving and it is sitting. We can't just move the water out," Gov. Nikki Haley said at a news conference.

One death was reported in the area on Sunday, bringing weather-related deaths to seven since the storm began days earlier.

People were told to stay off roads and remain indoors until floodwaters recede, and a curfew was issued for Columbia and across two surrounding counties. The capital city told all 375,000 of its water customers to boil water before drinking because of water line breaks and the threat of rising water to a treatment plant. Nearly 30,000 customers were without power at one point.

State forecasters said another 2-6 inches could fall around the state, and it could be Tuesday before skies are sunny. The rainstorm around the Southeast has drawn tropical moisture from offshore that's linked up with an area of low pressure and a slow-moving front.

Local officials counted several hundred water rescues by mid-morning before Columbia Fire Chief Aubry Jenkins said in an interview that there were too many rescues to keep count.

"We're just trying to get to everyone," Jenkins said. "But there are places we just haven't gotten to."

One of the hardest hit areas in Columbia was near Gills Creek, where a weather station recorded more than 18 inches of rain - or more than a third of the city's average yearly rainfall - nearly all of it in 24 hours. The creek was 10 feet above flood stage, spilling floodwaters that almost reached the stoplights at a four-lane intersection.

Vladimir Gorrin said he led his 57-year-old aunt through floodwaters about 7 feet deep surrounding her apartment near Gills Creek. He said his aunt, Wanda Laboy, waited several hours after calling 911, so family came to help.

His aunt, who didn't appear to be injured, was heading with her nephew to his house in an unflooded area of Columbia, he said.

"I'm trying to find my way back home, and every road that we've taken is blocked or flooded," he said in a phone interview.

Emergency shelters were being opened around the state for displaced residents, and President Barack Obama declared a state of emergency in South Carolina.

Along the coast, rainfall had exceeded two feet since Friday in some areas around Charleston, though conditions had improved enough that residents and business owners were allowed downtown on a limited basis.

"This was a record storm," he said. "You know the amount of rainfall that we have experienced is unprecedented. I feel very fortunate that we were able to get through this as well as we have."

At least seven weather-related deaths have been reported since rains began spreading over the Eastern Seaboard, which appeared to dodge the full brunt of Hurricane Joaquin as it veers out to sea.

The latest death reported was a woman killed when her SUV was swept into flood waters in Columbia. Richland County Coroner Gary Watts said the woman's body was found Sunday afternoon, about 12 hours after she disappeared in flood waters near downtown Columbia.

In Florence, about 80 miles east of Columbia, Mary Gainey was told Sunday about an evacuation order for her neighborhood along a rising creek.

"I've been rushing around, making sure I have everything I need," said the 65-year-old Gainey.

She's going to stay at her daughter's house until the water recedes.