ABCNews
By EMILY SHAPIRO
Rep. Steve Scalise, R-Louisiana, the House majority whip, is in critical condition, hospital officials said this afternoon, after he and four others were shot by a gunman who opened fire on members of Congress practicing for a charity baseball game in Alexandria, Virginia, this morning.
Scalise, a lobbyist, a congressional staffer and two Capitol Police officers were injured. The suspect died from his injuries sustained in the shooting, President Donald Trump said in his remarks this morning. 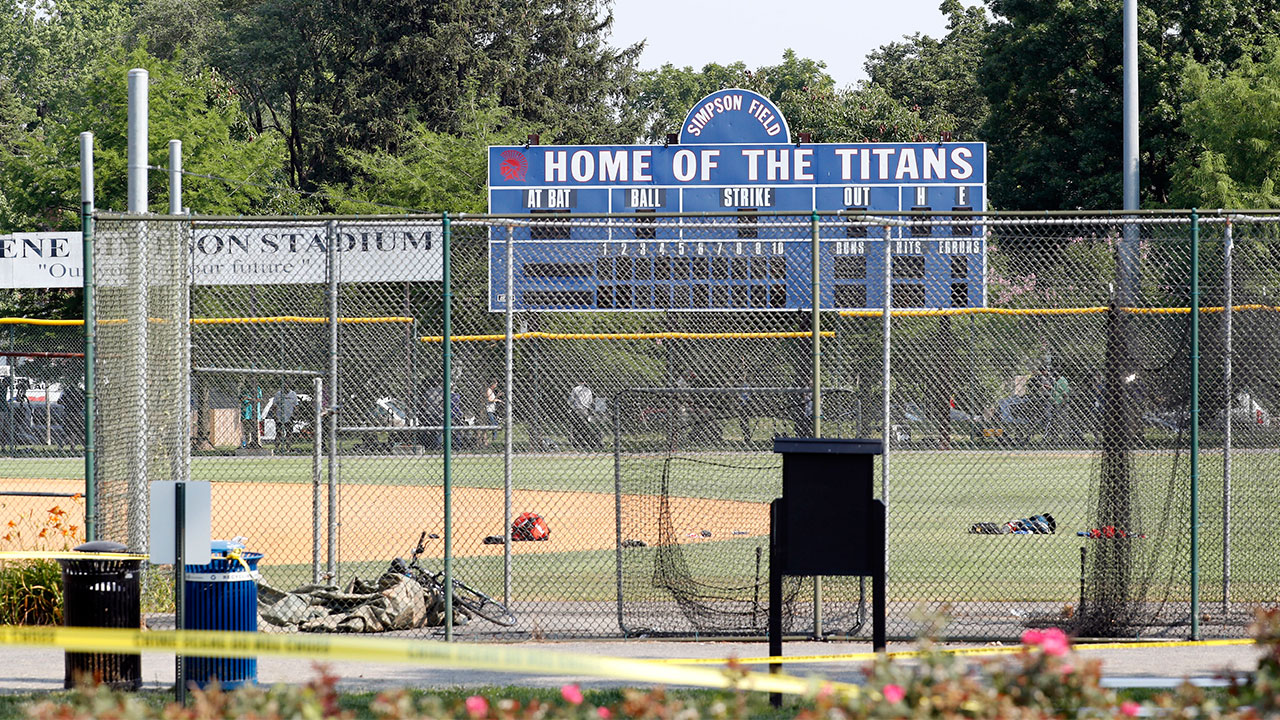 Scalise's office said he was shot in the hip and underwent surgery.

"Prior to entering surgery, the Whip was in good spirits and spoke to his wife by phone," his office said in a statement. "He is grateful for the brave actions of U.S. Capitol Police, first responders, and colleagues. We ask that you keep the Whip and others harmed in this incident in your thoughts and prayers."

Multiple law enforcement sources identified the suspected shooter as 66-year-old James Hodgkinson of Belleville, Illinois. His wife told ABC News he has been living in Alexandria, Virginia, for the past two months, but had not been working and was expected to return to Illinois in the coming days.

Rep. Steve Scalise of Louisiana, a true friend and patriot, was badly injured but will fully recover. Our thoughts and prayers are with him.

The shooting took place around 7 a.m. at Eugene Simpson Stadium Park in Alexandria, about seven miles away from the White House in Washington, D.C., where a number of lawmakers were practicing for the annual charity congressional baseball game set for Thursday. Only Republicans were at this practice; Democrats practiced earlier in the morning.

Zack Barth, a legislative correspondent working for Texas Rep. Roger Williams, was among those shot, according to a statement from Williams. Barth is receiving medical attention and is expected to make a full recovery, Williams said.

Williams' office said the Republican baseball team holds practice every morning at 6:30 a.m. ET at Eugene Simpson Stadium Park and that Williams is the team's coach.

My heart is with my former colleagues, their families & staff, and the US Capitol Police- public servants and heroes today and every day.

Matt Mika, who works as a lobbyist for Tyson Foods, was also injured. A Tyson Foods spokesperson said in a statement that Mika, director of government relations for its Washington, D.C., office, was hospitalized, adding, "We're awaiting word on his condition. Matt has worked for Tyson Foods for more than six years and we're deeply concerned about him and his family."

Mika previously worked for Rep. Tim Walberg, R-Michigan, and remains "a close friend" of his, according to a statement from Walberg.

"As a former baseball player, he was volunteering at this morning's practice to help the congressional team get ready for the game," Walberg said in a statement. "This is deeply personal and Sue and I are praying for Matt as he receives medical attention."

The two Capitol Police officers who were injured have been identified as David Bailey and Krystal Griner, according to House Speaker Paul Ryan.

"I spoke with special agent Bailey and special agent Greiner this morning. One was being treated and one was about to go into surgery," Ryan said. "It is clear to me based on various eyewitness accounts that without these two heroes, Agent Bailey and Agent Griner, many lives would have been lost."

Rep. Mo Brooks, R-Alabama, told CNN, "I was on deck about to hit batting practice on the third base side and I hear, 'Bam.' And I look around and behind third base ... I see a rifle. and I see a little bit of a body.

"At the same time I hear Steve Scalise over near second base scream," Brooks added. "He was shot."

Brooks said he took off his belt and he and another congressman applied a tourniquet to try to slow the bleeding.

Brooks said a security detail returned fire at the active shooter. Brooks estimated that 50 to 100 shots were fired.

At least 21 members of Congress were at this morning's baseball practice, including Scalise and two U.S. senators. Staffers and family members were also there; Rep. Joe Barton, R-Tex., said his two sons were in attendance, including his 11-year-old son. All members of the GOP baseball team have been accounted for.

Barton said in a statement, "The suspect was shooting at members and staff on the field. Officers of the Capitol Police returned fire and ran toward the shooter, risking their lives while saving others. The incident lasted for approximately 10 minutes."

Sen. Rand Paul, R-Kentucky, told ABC News he was in the batting cage when he heard an isolated gunshot.

Then "a burst of gunfire" erupted, Paul said. "At that point, people were dropping. Scalise was shot around second base and he crawled a little bit into the outfield," he explained.

"These guys were real heroes and I think without them everybody probably would have been killed," Paul said. "Steve Scalise is in leadership and that's the only reason there was security detail there at all. I'm sad that he was shot but he actually saved everybody's life by being there."'

Rep. Brad Wenstrup, R-Ohio, an Iraq War veteran, told Fox News that once the shooting stopped he administered aid to Scalise, putting a compression on his wound.

"I felt I was back in Iraq but without my weapon," he told Fox News.

Wenstrup said Scalise "was as brave as he could possibly be. He said, 'I'm thirsty.' Obviously, you don't know how much fluid he may be losing internally."

Rep. Rodney Davis, R-Illinois, told ABC News he saw "the bravery of the two capitol police officers that engaged the shooter that saved the lives of every single person there. ... Without them there, this would have been a massacre."

Davis said his message to the shooter is, "We are the greatest country in the history of the world. We have freedoms that many on this globe wish they would have, and you took those freedoms and tried to take lives. And you didn't succeed, and there is a warm place in hell for you, too."

At a news conference this morning, Alexandria Police Chief Mike Brown assured residents that the community is safe.

The FBI is leading the investigation and the Bureau of Alcohol, Tobacco, Firearms and Explosives is conducting traces on one rifle and one handgun taken from the scene.

In an on-camera statement, Trump spoke directly to Scalise, saying, "Steve, I want you to know that you have the prayers, not only of the entire city behind you, but of an entire nation and frankly, the entire world."

Trump added, "We may have our differences, but we do well in times like these to remember that everyone who serves in our nation's capital is here because above all, they love our country."

Both Trump and Vice President Mike Pence canceled their scheduled speeches for today.

Scalise's office said no votes are expected in the House today.

Senate Majority Leader Mitch McConnell, R-Kentucky, said this morning, "We're deeply saddened. We're all concerned for those injured. We'll keep them in our prayers and send them our wish for a quick and full recovery."

He added, "The congressional baseball game is a bipartisan charity event. I know the Senate will embrace that today as we come together to express our concern and our gratitude."

The game will go on Thursday evening as planned at Nationals Park.

Rep. Eric Swalwell, D-California, tweeted, "We will play for charity, but also for the victims & the heroic officers who took down the shooter."

Former member of Congress Gabrielle Giffords, who was shot in 2011, said in a statement today, "It doesn't matter if you're a Democrat or a Republican, nor if you're a senator or a representative, nor a staffer or a sworn officer. If you serve the institution of Congress, you're connected to your colleagues, current and former, by a shared sense of service to ideals far greater than yourself. This shooting is an attack on all who serve and on all who participate in our democracy."

"I am heartbroken for the pain of Congressman Scalise, the other victims, and their family, friends, and colleagues who survived. I am thankful for the great courage of the Capitol Police, who were my protectors after I was shot and became my friends. I also know the courage it takes to recover from a shooting like this, and I know Steve and everyone there this morning have such courage in great supply," Giffords said. "May all Americans come together today with prayers for the survivors, love for their friends and family, and the courage to go about everyday making this country its best. Our nation is resilient, and we always come back stronger."
Report a correction or typo
Related topics:
virginiashootingu.s. & world
Copyright © 2020 ABC News Internet Ventures.
U.S. & WORLD