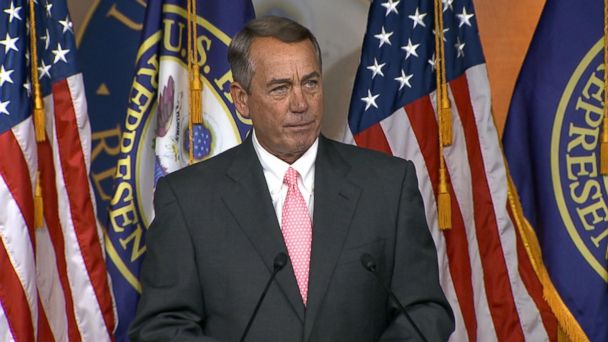 House Speaker John Boehner has officially announced his plan to resign from Congress at the end of October.

Speaking publicly for the first time since news of his resignation surfaced today, Boehner said in a news conference "this isn't about me. It's about the people and the institution."

Boehner explained the decision that shocked many members of his party by remarking on the impression Pope Francis left on him during the pontiff's Thursday visit to the Capitol.

"This morning I woke up and I said my prayers as I always do and I said, 'today, I'm going to do this,' and that was that," Boehner said. "I would not describe it as 'having had enough.'"

But he cited what he expected could be "turmoil churning for months" due to a potential leadership challenge as hastening his exit.

Boehner said that while he would not be around to vote on who would take over for him as speaker, he would recommend members choose Republican Majority Leader Kevin McCarthy, R-California.

Earlier, Boehner posted a statement to his Twitter account explaining his decision, saying, "the first job of any Speaker is to protect this institution that we all love."

"It was my plan to only serve as Speaker until the end of last year, but I stayed on to provide continuity to the Republican Conference and the House," Boehner said. "It is my view, however, that prolonged leadership turmoil would do irreparable damage to the institution."

The announcement that he would resign was shared with members of the Republican caucus this morning, one day after a historic visit of Pope Francis to Capitol Hill, which Boehner helped facilitate.

Boehner has been under pressure from the right wing of his party as the coming battle over government funding heats up. Some lawmakers have mounted a challenge to unseat him from his leadership post.

"Speaker Boehner believes that the first job of any Speaker is to protect this institution and, as we saw yesterday with the Holy Father, it is the one thing that unites and inspires us all," an aide to Boehner told ABC News.

"The resignation of the Speaker is a stark indication of the disarray of the House Republicans," said Pelosi, who served as House Speaker before turning the gavel over to Boehner in 2011. "With all due respect to the Speaker and his announcement, we still have to stop the government from shutting down."

President Obama remarked today on Boehner's resignation, saying it took him by surprise, and that he called Boehner directly upon hearing the news.

"John Boehner is a good man," Obama said. "We have obviously had a lot of disagreements and politically we are at different ends of the spectrum, but he has always conducted himself with the courtesy and civility with me."