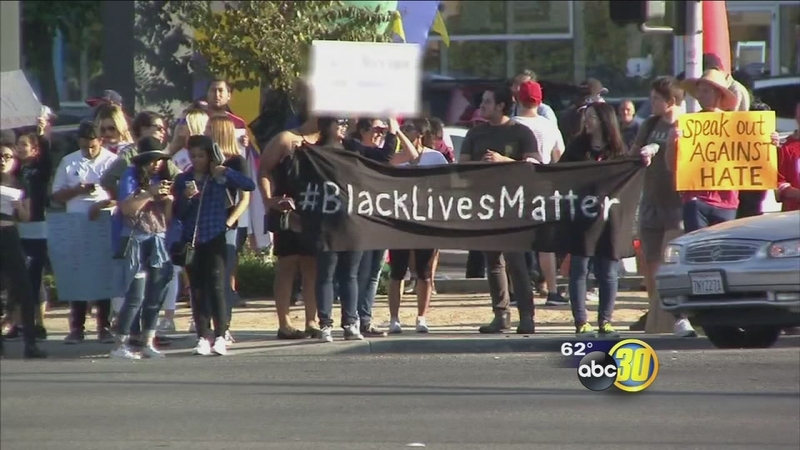 FRESNO, Calif. (KFSN) -- While thousands of protesters filled the streets in city's across the US, the protests in Fresno were much calmer.

Fresno Police Chief Jerry Dyer said there were absolutely no problems while several hundred men and women protested President-elect Donald Trump. The protest took place at the busy intersection of Shaw and Blackstone Avenues, and it started at about noon and ended a little bit after 3 p.m.

Four days after the election, many remain unhappy with the results. Thousands protested in Los Angeles, and nearly 400 people in Fresno made it known they are not happy about the man chosen to lead our country.

UCSF Fresno resident physician Brian Blake was among the large crowd standing on all four corners of this busy intersection in northwest Fresno. He said Trump's stance on healthcare is one of many things that bothers him.

Blaine Roberts is a Fresno State professor, and she came out for her two young daughters.

"It's very difficult to look at them and say that millions of Americans voted for someone who thinks it's okay to sexually assault women and then brag about," she said of Trump.

Demonstrators waved signs and even walked across the street, using the crosswalk when the light turned green. And while that happened, police stood close by and reminded protestors to stay out of the roadway.

But not everyone was in support of the rally. There were a handful of Trump supporters who made their voices heard too. With dozens of rallies happening all over the country and in California, President-elect trump took to Twitter, saying, in part, that: "We will all come together and be proud."
Related topics:
fresno northwestdonald trumpprotestfresnofresno police department
Copyright © 2021 KFSN-TV. All Rights Reserved.
FRESNO
Valley companies look to hire, experience work shortage
George Lopez to bring comedy show to Fresno
Dozens help clean up at Camp Fresno
Bakery in River Park celebrates grand opening
TOP STORIES
Merced teacher back home after battle with COVID-19
Looking back at the ups and downs of COVID in Central CA
24-year-old man shot in southwest Fresno, police say
What changes throughout Central California as state reopens
CA has reopened, but not everyone can go maskless
Suspect involved in standoff in Kings County identified
19-year-old arrested on arson charges for NW Fresno fires
Show More
What to expect from CA's reopening today
Newsom picks 10 winners of $15M to celebrate reopening
1 killed in shooting on Hwy 99 near Merced
Valley doctors discuss California's reopening
Valley travel industry shows signs of rebound as CA reopens
More TOP STORIES News