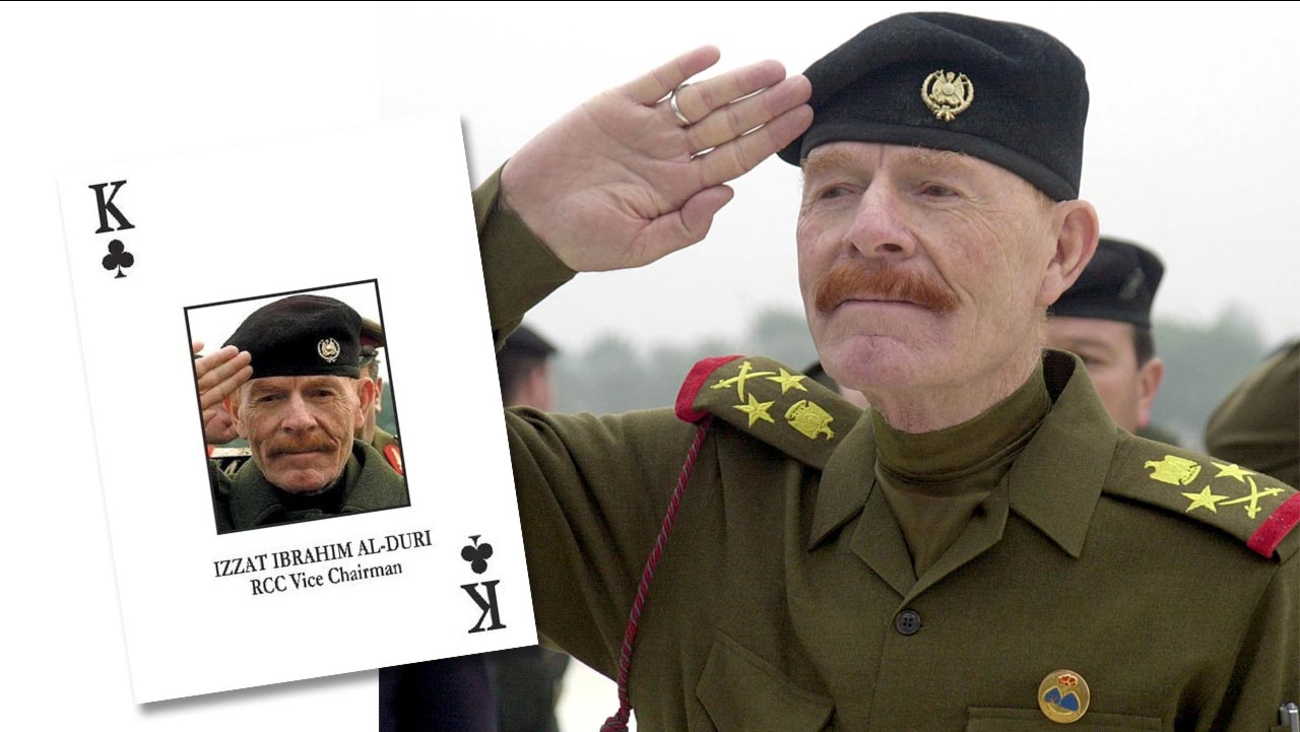 BAGHDAD -- Iraqi officials said Friday they believe that government forces killed Izzat Ibrahim al-Douri, the former deputy of Saddam Hussein who for over a decade was the top fugitive from the ousted regime and became an underground figure involved in Sunni insurgencies, most recently allying with Islamic State militants.

It was not the first time Iraqi officials have claimed to have killed or captured al-Douri, who was the "king of clubs" in the deck of playing cards issued to help American troops identify key regime fugitives after the 2003 U.S.-led invasion ousted Saddam. DNA tests were underway to confirm whether a body recovered from fighting around the city of Tikrit was al-Douri's.

Reports of al-Douri's death came as Iraqi forces are trying to push back Islamic State group fighters in Salahuddin province, where Tikrit is located. Government troops took back several towns near the country's largest oil refinery at Beiji in the province, officials said.

Further north, a large car bomb exploded Friday afternoon next to the U.S. Consulate in the northern Iraqi city of Irbil, a rare attack in the capital of the Kurdish autonomy zone. An Associated Press reporter at the scene said the powerful blast went off outside a cafe next to the building, setting several nearby cars on fire.

There was no immediate word on casualties. A U.S. official said no consulate personnel or guards were killed or injured in Friday's blast. The official spoke on condition of anonymity because he was not authorized to talk to the press.

The governor of Salahuddin province, Raed al-Jabouri, told the AP that al-Douri was killed by Iraqi troops and Shiite militiamen in an operation in the Talal Hamreen mountains east of Tikrit, Saddam's hometown, which was retaken from the Islamic State group earlier this month.

Troops opened fire at a convoy carrying al-Douri and nine bodyguards, killing all of them, according to Gen. Haider al-Basri, a senior Iraqi commander speaking to state TV.

The government issues several photos showing a body purported to be al-Douri. The body had a bright red beard, perhaps dyed, and a gingerlilgh-colored moustache. Al-Douri was a fair-skinned redhead with a ginger moustache, making him distinctive among Saddam's inner circle.

DNA tests were underway to confirm the identity of the body, Iraqi intelligence officials told The AP, speaking on condition of anonymity because they were not authorized to talk to the media. In 2013, the Iraqi government said it arrested al-Douri, circulating a photo of a bearded man who resembled the former Baathist. It later said it was a case of mistaken identity.

Col. Pat Ryder, spokesman for U.S. Central Command, said the U.S. has no information to corroborate the reported death of al-Douri.

Al-Douri was officially the No. 2 man in Iraq's ruling hierarchy. He served as vice chairman of Saddam's Revolutionary Command Council, was one of Saddam's few longtime confidants and his daughter was married briefly to Saddam's son, Odai, who was killed with his brother, Qusai, by U.S. troops in Mosul.

When Saddam's Baathist regime collapsed as U.S. troops occupied Baghdad, al-Douri disappeared. He was No. 6 on the most-wanted list of 55 Iraqis after the invasion. When Saddam was killed months later and more regime figures were caught, al-Douri became the most prominent fugitive - and U.S. authorities soon linked him to the Sunni insurgencies that erupted against the American occupation and the Shiite-led government that replaced Saddam.

Early in the war, U.S. authorities linked al-Douri to Ansar al-Islam, a militant group with ties to al-Qaida, and he was accused of being a major financier of the insurgency. Sunni former officers from Saddam's military and police were believed to have played large roles in the insurgency, whether with al-Qaida or other factions.

Al-Douri emerged as a leader of the shadowy Army of the Men of the Naqshabandi Order. The group depicts itself as a nationalist force defending Iraq's Sunni minority from Shiite rule and as an alternative to the extremist version of Islam championed by al-Qaida. But last year, when the Islamic State group - the successor to al-Qaida's branch in Iraq - launched a blitz across much of western and northern Iraq, al-Douri, the Naqshabandi Army and other former Saddam-era officers reportedly entered a shaky alliance with it.

When Tikrit was overrun by the Sunni militant group last June, witnesses said fighters raised posters of Saddam and al-Douri. Fighters loyal to his Naqshabandi Army as well as former members of Saddam's Baath Party were the main militant force in Tikrit at the time of its capture, local residents told The AP at the time. Still, the Naqshabandi Army criticized IS atrocities, including the persecution of religious minorities and the burning of a Jordanian coalition pilot in Syria.

Meanwhile, north of Tikrit, Iraqi security forces gained full control over a contested area south of the Beiji refinery Friday as part of their push to secure the rest of Salahuddin province.

General Ayad al-Lahabi, a commander with the Salahuddin Command Center, said the military, backed by coalition airstrikes and Shiite and Sunni militias dubbed the Popular Mobilization Forces, gained control of the towns of al-Malha and al-Mazraah, located 3 kilometers (1.9 miles) south of the Beiji oil refinery, killing at least 160 militants with the Islamic State group.

Al-Lahabi said security forces are trying to secure two corridors around the refinery itself after the Sunni militants launched a large-scale attack on the complex earlier this week, hitting the refinery walls with explosive-laced Humvees.

Extremists from the Islamic State group seized much of Salahuddin province last summer during their advance across northern and western Iraq. The battle for Tikrit was seen as a key step toward eventually driving the militants out of Mosul, Iraq's second-largest city and the capital of Nineveh province. In November, Iraqi security forces said they had recaptured the town of Beiji from the militant group. The refinery had never been captured by the militants but has been subjected to frequent attacks by the group.

Sabah al-Karhout, head of Anbar's provincial council, said there were no major attacks on the city Friday but that the militants still maintained control of three villages to the east of Ramadi, which they captured Wednesday, sending thousands of civilians fleeing for safety.