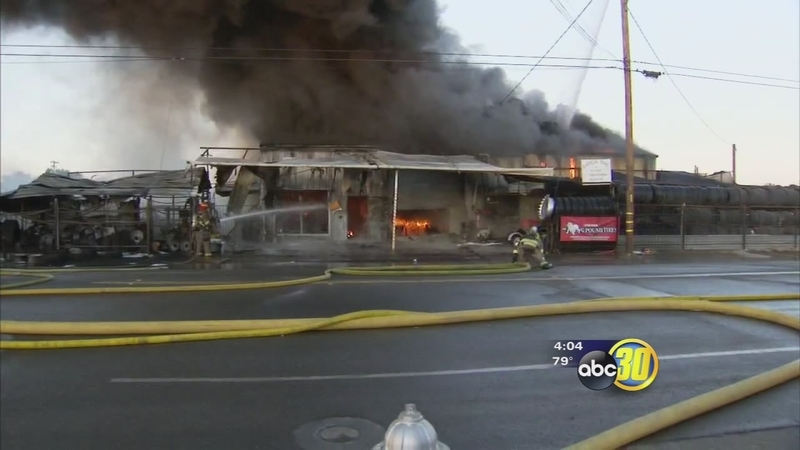 SAN JOAQUIN, Calif. (KFSN) -- A well-known tire and auto repair shop in western Fresno County went up in flames Tuesday morning, and now the owner is looking to rebuild from the ashes left behind.

Garcia's Tire and Auto Repair Shop is on Colorado and Ninth. Firefighters saved some of the tire inventory, but other tires near the flames and a propane tank were a big concern.
------
Video courtesy of #abc30insider Alfonso Garcia
EMBED More News Videos

Just after 5:00 Tuesday morning Cal Fire responded to the fire at a business that sits in the middle of the small west Fresno County Community. Cal Fire officials had to call in additional help from the North Central Fire District because of the large inventory sitting outside of the shop.

"The biggest thing is actually, with this much volume of tires was actually getting equipment into a location to put it out," said Owen Starkweather, Cal Fire Captain.

A large propane tank sits nearby but Cal Fire said two dozen firefighters and seven engines worked quickly to prevent the flames from moving into that area.

The owner's daughter, Irene Garcia, said her father Antonio lost about $750,000 in equipment and inventory. He's now working with his insurance company to rebuild.

"He's already talking about trying to find another location so he can start up again. He's not ready to retire," said Garcia.

Garica said her father opened his business 10 years ago and the family has strong connections to San Joaquin. And that's why he's always willing to help out his customers even if they couldn't pay. Giving them credit or working out a payment plan.

"I don't know if there is another business in this community that will extend that kind of credit to people from the community," Garcia said.